What is HDD and SSD?

This week we go back to basics and look at two storage technologies: HDD (hard disk drive) and SSD (solid-state drive).

SSDs are known for their amazing performance at minimal cost, with the potential to speed up existing computer systems and servers without breaking the bank. Hard disk drives are low-cost with a much higher capacity to store data – which is the main reason they are still in use.  Join us for a quick take on the histories, benefits and just a few of the many acronyms in this field!

Introduced in 1957, RAMAC (Random Access Method of Accounting and Control) was the first commercial computer disk storage system in the world. Before RAMAC, magnetic tape had been the main storage option for computers. This new method from IBM brought in moveable read/write heads, which enabled faster access to data volumes and effectively ushered in a new era for computer systems.

The first RAMAC computers were huge – with the hard disks used in this system about the size of two refrigerators.  IBM continued to work hard to resolve the issue of bulky storage devices, coming up with a new solution which utilized removable storage. In 1962, they introduced a disk storage drive in the IBM 1316. Initially, the size of the disk was 24 inches, which was later reduced to 14 inches. Each disk had the capacity to hold up to 2 MB.

Before the 1970s, you’d mainly only find computers at big companies, in universities, or government institutions because they were prohibitively expensive and huge. As the cost of electrical equipment decreased and the density of memory chips increased, the PC revolution began. By 1980, Shugart Technology (later Seagate Technology) had created a new hard disk drive of 5 MB, especially for personal computers. At just 5.25 inches in diameter and costing around $1500, it was a far cry from the early days.

The cost of hard drives continues to decrease and manufacturing companies are still working on the design and capacity of the hard disk drives. We can probably expect a lot more from them in the coming 20 or 25 years.

SSD is an abbreviation for Solid-State Drive. It can be defined as a type of non-volatile storage which functions like a hard drive using a different technology i.e. flash memory to store data persistently. Although it is often termed as a solid-state disk, it does not contain any kind of physical disk. It incorporates form factors and protocols (like SATA, Serial Advanced Technology Attachment, and SAS, Serial Attached SCSI) of old and traditional hard disk drives, which actually simplifies the usage of these drives.

As compared to traditional electromechanical drives like hard disks and floppy disks, SSDs do not contain any kind of moving part or component. Hard disk drives use a spinning disk and read/write heads to store data while SSDs follow a different mechanism for such purposes. They read and write data with the help of flash memory chips, which are made out of silicon.

To make solid-state drives non-volatile, they are designed with FGR (Floating Gate Transistors) which have the ability to store an electrical charge. By doing so, SSDs can store data even when there is no power supplied. However, as the data is stored in the form of electrical charges, it will start to leak if no power is supplied for a long period of time. Hence, these drives are not recommended for archival purpose.

The best features of SSDs include resistance against physical shock, the ability to function silently, fast access and lower latency. With such features, they are specially used in those applications where you are required to deliver more real-time data such as in high-performance server, laptops, and desktops. Apart from this, SSDs are also used in some common consumer devices such as computer games, digital cameras, digital music players, smartphones, tablets, and thumb drives.

Some of the important features of the solid-state drive are as follows:

Here are some of the different types of SSD drives and their data transfer capabilities:

This table looks at  the advantages of SSD over traditional hard disk drives. 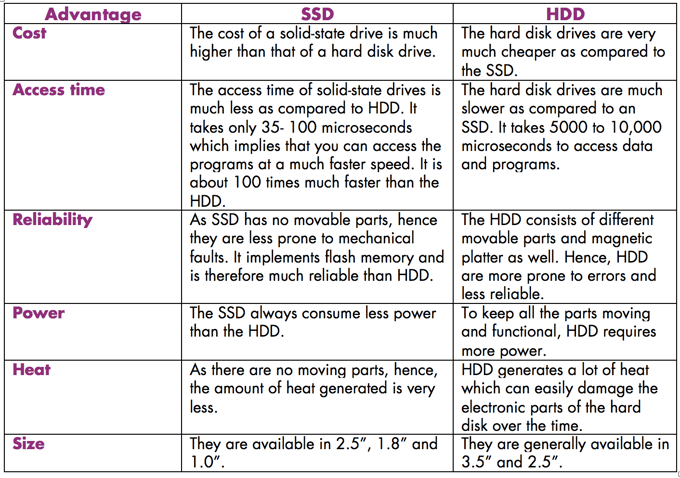 Check out more "What is" blogs:

What is NDI?
What are genlock, gramelock & timecode sync?
What is MPCDI?
What are the most important tools for a video professionals?
What is projection mapping?
What is Dante?
What is SDI?
What is ASIO?
What is WASAPI?
What is camera-based projection auto-alignment?