It all started around 2002 in Montreal, where Dangers Inc is headquartered, with an opportunity to try to project onto the ice for the National Hockey League’s local team, the Montreal Canadiens.  At first, it was with very large and very bright slide projectors: the ETC PIGI projectors which featured a scrolling system which produced not only single images but moving ones as well.  One week after our initial offering, the Detroit Red Wings called and we were in Detroit days later.  The quality of our work quickly became known and several more NHL teams requested our services within a very short period of time.  In 2008, after some thorough research, we moved to digital video projection.

Today of course, while our PIGI projectors are still very much active (last month on the Guggenheim Museum in Spain with renowned visual artist Jenny Holzer), video projection has become the norm in the NHL and Dataton WATCHOUT became the tool of choice when it came to operating our systems for all our NHL pregame presentations. From its transition to video, DANGERS benefited from having one of the best content creators in the field, Mr. Luc Lavergne who has been with us ever since. His “magic” includes highly rated, and unequalled 3D mapping offerings… a huge plus for our firm.

What makes ice so special as a medium?

Ice is a magnificent surface to work with for projections.  It reflects the light and images beautifully.  North American ice surfaces measure 200’ x 85’ (60.96m by 25.9m), plenty of canvas to work with, and just enough detail on its surface to allow is to create some incredible 3D effects.  Game markings, team identifications and even sponsor logos all contribute to creating illusions which mesmerize audiences and generate large viewings on social media.

Many, if not most, NHL arenas today also have much more control over, not only the ice surface lighting but the overall lighting thanks to shutter systems and more recently LED technology. Excellent, more powerful sound systems, theatrical intelligent lighting, larger, and more defined scoreboard, LED ribbons and of course Ice Projection now play a large part in enhancing the fan experience.  The audience not only gets to see a hockey game but intricate and entertaining pregame shows are now standard National Hockey League arenas.  The overall result: the atmosphere is electrifying (the Tampa Bay Lightning even have Tesla coils), the crowd is primed and ready for what is one of the fastest, most entertaining sport in the world. 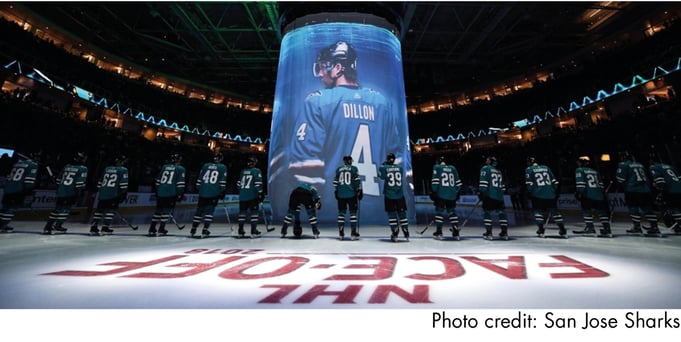 The DANGERS specialty is projecting on non-standard and unusual surfaces including fog screens, waterfalls, water-screens, Cylindrical kabuki dropped projection screens, buildings, and even a 16’ perfect replica of a Coca-Cola bottle.  Of course sports-related playing fields: basketball courts, football fields and our “standard” ice surfaces are our benchmark when it comes to "non-traditional" surfaces.

What's important to consider when working in an arena with ice projection?

Most of our ice projection projects consist of short term installations: season openers, playoffs and special events such as player jersey retirements and from the onset, we chose Dataton WATCHOUT as our operating system.  For one, it was, and still is a very user-friendly system.  This allowed us to train and recruit a large number of operators as the demand in peak periods is high.  The system fulfils all of our needs in terms of content manipulation and perform admirably when it comes to mapping, masking or warping an “ice rink”.  In fact the focus process is done with such precision that binoculars are used and frequently just a single pixel over hundreds of feet will be moved.

This is a DANGERS specialty.  We’ve seen many other ice projection presentations where the ice is not fully covered or is overshot.  That is not an option for us.  Ultimately, our system designs are meant to be efficient, cost-effective and WATCHOUT fits our mandate perfectly.

Most of our presentations incorporate mapping not only the painted lines and face off circles used in the game but also, and this is often challenge, the various team logos and sponsors painted into the ice.  The precision is such that audiences are stunned when the ice suddenly falls apart, opens up or begins to move.  It makes for some wonderful imagery and impressive audience reactions.

WHAT WAS YOUR MOST CHALLENGING (AND FUN) EVENT?

One of our major achievements was our work in the Coca-Cola Activation Tent during the 2010 Vancouver Olympics.  Our initial mandate was to produce a high impact presentation on the curved ceiling (the material for the ceiling involved a process in which we collaborated with a chemist to maximize the indoor and outdoor luminescence of the final product).

Our projections used 10 20,000-lumen projectors and was 108’ by 80’ in size.  The curved tent surface viewable both indoors and outdoors was a challenge in itself but, the “piece de résistance” was an award winning 360°, interactive projection on a 16’ exact replica of a Coca-Cola bottle which was the centrepiece of the Activation Tent. 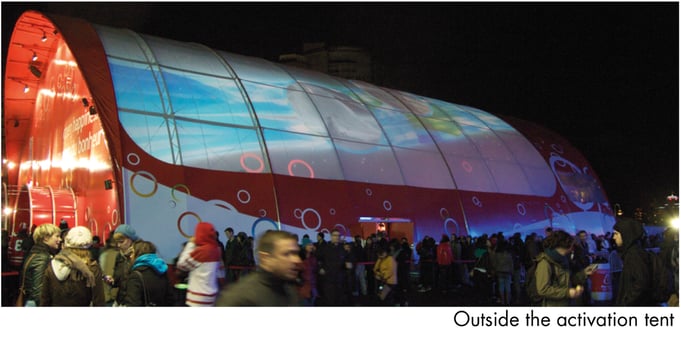 Projections featured the Coca-Cola “liquid” of course with the added feature of bubbles triggered by the audience.  Many more interactive effects were possible and, when Canada won a gold medal, the bottle would turn gold!

Challenges included having no shadows when the audience triggered the interactive effects. This was achieved by positioning the projectors virtually straight down vertically.  The infra-red cameras were subsequently strategically positioned to maximize the interactive effects.  Mapping the bottle – don’t forget it was 360° – was also a major challenge, but Bob Levac, our technical director succeeded after many hours.  The result was a highly acclaimed success.

All projections were ultimately projected onto a perfect 16’ grey replica of the iconic bottle.  Our clients were ecstatic with the end result - always our primary goal.  WATCHOUT was once again the operating system for the Coca-Cola project.

WHEN IS DANGERS BROUGHT INTO THE CREATIVE PROCESS?

As a rule, we have an excellent working relationship with the game presentation personnel with our National Hockey League clientele.  We’ve always favoured a collaborative effort between the teams’ creatives and our artistic director.  This formula, as a rule, has worked admirably well. Our expertise, with more than 500 ice projection performances, have enabled us to become pros at recommending what works and what doesn’t on an ice surface.  Just looking at computer screen simply does not work.

Ultimately the combined efforts of the design teams, a DANGERS project manager who insures the light levels in the arena are appropriate, and operators that are sensitive to the needs of our clients, all make for slick and obviously, well-appreciated pre-game presentation.

Where could your projections be seen during the 2019 NHL Playoffs?

Three teams, the Tampa Bay Lighting, the Columbus Blue Jackets and San Jose Sharks retained our services for the initial round of the 2019 NHL Playoffs. Fast forward to round 3... 1 team, the San Jose Sharks remain.  Two more teams have enquired about our availability for the NHL Finals. Nothing unusual... they know we deliver.

Work on the Guggenheim Museum in Bilbao in Spain and the NCAA Frozen Four (National Collegiate American Association Hockey Finals) has made for a particularly busy April-May.

The 2019 scenario repeats itself more or less every April and again when the NHL season starts in October.  Hockey is definitely our specialty; we know hockey, we know what works and what does not.  Twenty-two of thirty-one teams, and the NHL itself have used our services over some 15 plus years.

CFL Football, NCAA & NBA basketball (including some pretty cool NBA Pre-Game shows), and PGA golf have all been part of our activities over the past several years... I guess we know sports. This said, we are honoured to have also been working with Jenny Holzer, a world acclaimed visual artist, for the past several years.  And so many more projects are in the works...

Stephan Mazurek on projection design in the theater