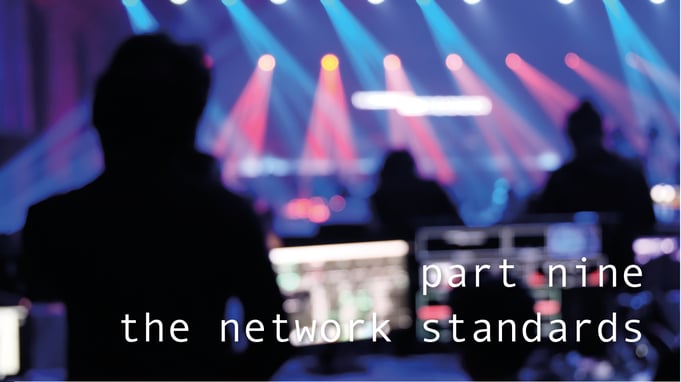 Have you considered becoming a professional media server operator or user? Unsure of what technical skills you need to become one? In the ninth blog in the series, we look at networked video and audio standards – a topic that seems hotter than ever these days.

This is an overview of what I will cover in this instalment of the guide to becoming a media server professional:

In our connected world, it's only natural that more content is migrating to a networked environment when it comes to media servers. In both live events as well as fixed installations, being able to push everything through a single piece of cable is both tempting and efficient – at acceptable quality levels.

If you are fairly familiar with networks, read on. If you want a recap, head over to the previous blog post or check out these earlier blogs:

There have been a lot of development during the last few years with several standards having hit the market. Among them we find: NDI® by NewTek™, SDVoE® by SDVoE Alliance, HDBaseT™ by HDBaseT Alliance, and finally AVB By IEEE.

What is NDI® by NewTek™?

NDI is the most widely used IP standard and was developed by NewTek™ (later acquired by Vizrt).  NDI is designed to distribute professional video over existing IP infrastructure, freeing users from proprietary hardware requirements with the benefits of reduced cost and deployment time. At time of writing, the NDI is out in version 4.5 and has features to allow systems to find, send, and/or receive video streams over IP, with an encoding algorithm that is resolution independent and supports frame rates up to 4K and beyond. It also supports 16 +channels of floating-point audio.

For a little more background, you may want to read a longer article I wrote a while ago about NDI, "What is NDI?"

Dataton’s WATCHOUT is a media server software that supports NDI directly and WATCHOUT will discover NDI units that is present in the network and can directly receive video feeds.

What is SDVoE® by SDVoE Alliance?

SDVoE was developed by the SDVoE Alliance, a nonprofit consortium of technology providers collaborating to standardize Ethernet to transport AV signals in pro-AV environments. Among the founding members you find SONY, Christie Digital and Netgear.

SDVoE differs a bit from NDI in the way that it is what is called a “full stack solution” which means that while the video signals are sent through regular IP networks, you still need converters at each end of the infrastructure. As far as I have seen, there are no media servers that natively support SDVoE at the moment.

What is HDBaseT™ by HDBaseT Alliance?

HDBaseT is a standard developed by HDBaseT Alliance, and supports high resolution video and audio, Ethernet, command and controls, USB and up to 100W of power over a single cable, for up to 100 m/328 ft. HDBaseT Alliance has more than 200 members globally, including companies such as LG, Samsung, SONY, Panasonic, EPSON and many more.

HDBaseT is not per se a distributed video in the way that you can send signals through a regular multi-layered Ethernet network (through routers and switches) as it is a point-to-point system (one unit speaks with another unit, but not many units as with NDI).

But HDBaseT has been widely adopted and is also used in media servers. French company Videmus has presented a media server using Dataton WATCHOUT with six channels HDBaseT.

In the seventh installment of this guide, I covered HDBaseT so you can read more about it here: "Guide to becoming a media server professional, part 7"

What is Audio Video Bridging By IEEE?

AVB was initially developed by the Institute of Electrical and Electronics Engineers (IEEE) Audio Video Bridging from the IEEE 802.1 standards committee. In 2012 the AVB group was renamed the Time-Sensitive Networking task group to reflect an expanded scope: "provide the specifications that will allow time-synchronized low latency streaming services through IEEE 802 networks".

AVB is an IEEE 802.1 standard that allows you to send high quality, low latency and time synchronized digital audio and video through Ethernet – you can send multiple streams simultaneously.

With AVB being a network standard, Avnu is the alliance and community that is creating an interoperable ecosystem of networked devices. The Avnu Alliance members include more than 95% of the Ethernet silicon suppliers in the market, including leading companies from networking infrastructure space, and known brands from the audio-visual industry, with members such as Cisco, Biamp, Avid, Bose, Analog Devices, Harman, Yamaha and Texas Instruments.

Avnu Alliance's aim is to facilitate a certified networking ecosystem that simplifies network synchronization through Audio Video Bridging (AVB) and Time Synchronized Networking (TSN) standards, natively built into Ethernet, not around it.

Audio Video Bridging is an evolution of standard Ethernet and other compatible media, such as wireless networks, to support real-time audio video and control applications. AVB standards add capabilities to the Ethernet network with several benefits::

Note that not all Ethernet products support AVB and they need to be upgraded/enhanced to support it if it is possible at all – have a look at the Avnu page for supported equipment.

As you have seen from the video standards above, many of them also encompass audio. In many cases you might not need a dedicated audio system, but in case you do, there are many to choose among:

What is CobraNet by cirrus logic?

CobraNet was developed by Cirrus Logic and was designed to deliver uncompressed, multi-channel digital audio over Ethernet. It consists of a combination of software, hardware, and network protocols and was developed in the 1990s. CobraNet is considered as the first (commercially successful) audio-over-network solutions. CobraNet’s intended use was large-scale installations such as stadiums, airports, convention centers and theme parks.

CobraNet use Ethernet packets to be sent over the network (not TCP/IP) which has both benefits and disadvantages. Benefits are that the packets are not victim of latency and QoS problems streaming protocols using a higher transport layer (do you remember the OSI model? ).

Because it does not use the IP protocol, routers will not pass them through and hence you are limited to the use on a LAN and not over the Internet.

CobraNet organizes its audio in channels and bundles. A CobraNet signal can contain up to 4 bundles of audio (bi-directional), with a maximum of 8 bundles per device. A bundle can have up to 8 channels of 48 kHz, 20-bit audio, with a maximum capacity of 64 channels.

CobraNet is used by companies such as JBL, Bose, Biamp and many others – a more elaborate list can be found at the Wikipedia page.

What is Dante by Audinate?

Dante (digital audio network through Ethernet) was developed by Audinate in 2006 and is a combination of software, hardware, and network protocols designed to deliver uncompressed, multi-channel, low-latency digital audio over a standard Ethernet network using IP packets.

It has several advantages over CobraNet and EtherSound, such as support for gigabit data-rates, more channels, lower latency, as well as a system for automatic configuration.

Dante audio is 100% lossless (24 or 32-bit), and supports sample rates from 44.1 kHz to 192 kHz. Dante is probably the most used (and least known) audio-over-network solution with more than 2000 products and over 400 manufacturers supporting it.

Ethersound network use is designed differently than most other systems and while being compliant with the IEEE 802.3 physical layer standards, it uses a token passing scheme to transport audio data. This means that not all features will be available on a standard Ethernet network. Ethersound is best suited for applications in a daisy-chain network topology or live sound settings that will benefit from its low point-to-point latency.

EtherSound can deliver up to 64 channels of 48 kHz, uncompressed 24-bit audio with a network latency of 125 microseconds.

Companies like Yamaha, Allen & Heath and Auvitran are companies among many others that use EtherSound.

AES67 is a standard for audio-over-IP and audio-over-Ethernet (AoE) interoperability, developed by the Audio Engineering Society. It was first published in September 2013 and in 2018 a new version was released, the AES67-2018.

AES67 is based on existing standards and is specifically designed to handle interoperability between other IP-based audio networking systems such as RAVENNA, Livewire, Q-LAN and Dante.

AES67 has been adopted by companies such as Yamaha, Lawo, Merging Technologies, ALC NetworX, Sienna and QSC.

What is RAVENNA by alc Networx?

RAVENNA (Realtime Audio Video Enhanced Next generation Network Architecture) is an open technology, developed by ALC NetworX, designed for real-time distribution of audio and other media content in IP-based networks. RAVENNA uses standardized network protocols and technologies and is fully compliant with AES67.

Although anyone is free to develop their own solutions, ALC NetworX still leads development.

RAVENNA supports a wide range of different data formats used in professional environments. That means16 and 24-bit integer as well as 32-bit full bit-transparent AES/EBU data formats can be combined with any relevant sampling rates (32 … 192 kHz).

Companies like ALC NetworX, Ross, Archwave, Digigram and Lawo use RAVENNA in their products.

what is Livewire by axia audio?

Livewire was developed by Axia Audio (a division of The Telos Alliance) and is an audio-over-IP system. It was designed with a market focus for radio stations, primarily to route and distribute broadcast-quality audio.

The initial Livewire standard was introduced in 2003 but has been superseded by Livewire+ AES67. Livewire+ is compatible with AES67 and Ravenna standards allowing full interoperability with other manufacturers products.

Livewire+ uses IP and Ethernet over standard cabling. Its maximum sampling rate is 48kHz and a maximum bit depth of 24 bits.

There are even more audio-over-network protocols and solutions. Wikipedia has a comparison chart that could be of interest for those of you who just can't get enough.😜

Thanks for holding up! This project has grown into a much larger concept than I initially had in mind and there are at least 5-6 new articles in the brew. Feel free to send me your thoughts on the subjects covered or ideas for other articles on the theme – any input is highly appreciated. 😎