Guide to becoming a media server professional – Part 8: The network 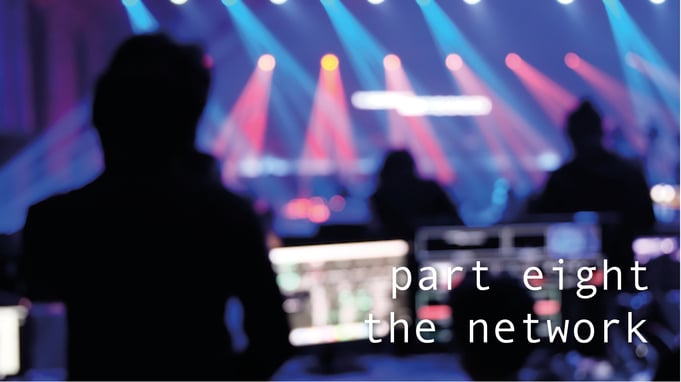 Have you considered becoming a professional media server operator or user? Unsure of what technical skills you need to become one? In blog number eight in the series, we continue with the infrastructure and system setup, moving on to network standards and connectivity. So fetch a coffee and let’s go!

The previous blog looked at the most relevant standards for cabled audio and video. Here's what I will cover in this instalment of the guide to becoming a media server professional:

Everything is connected! If not through legacy video and audio cables, it is through network cables. As bandwidth availability and quality is higher and prices lower, it is a trend in the market that regular networks are replacing the need for dedicated cabling for audio and video – and not only command and control communications. The best part of this trend is that the legacy and manufacturer proprietary connectivity solutions are soon diminished into oblivion.

With more units, products and services moving to regular IP-based networks, it can be seen as a paradigm shift in how media server professionals need to broaden their scope of competence to also cover network and connectivity on a wider scale.

Luckily for you (and me, since I do not need to invent the wheel again), I have written two blog posts with more in-depth network information:

As these blogs are quite detailed, I will keep this one on a less intricate level.

To program a media server, you will in many cases have a software installed on a production computer (hardcore laptop or a heavy-duty workstation). This is where you program your media server shows and later distribute the content to the media server(s). The two (or more) devices need to communicate and they might also need to communicate with other devices. In a fixed installation, perhaps a control panel (created through the media server software, Crestron or other systems) will be used to control the media server. In a live event you want to keep everything in cue with lights and video content, then you need to either receive info from a lightning table or send control commands to one or more devices.

This is when you need to understand networks and communications on how these devices will work together.

WHAT IS A NETWORK?

A network is a collection of devices such as media servers, display units, storage servers and other units which are connected, allowing them to communicate or transfer data. Internet is of course the best example of a (large, WAN – Wide Area Network) network. Your home network is an example of a (small, LAN – Local Area Network) network – yet with exact the same principles as the Internet (which is a WAN). Units connected to any network need to speak the same language and that language is TCP/IP (Transmission Control Protocol/Internet Protocol).

Ethernet is a referral to the most common type of network in use today. Institute of Electrical and Electronics Engineers (IEEE) defines Ethernet as protocol 802.3, but nobody really uses that protocol name anyway – “ethernet” is fine.

Ethernet has been around since the 1970s and is most likely going to stay with us for a long time more. Even with more and more focus on wireless networks, the traditional cabled network has advantages over wireless when it comes to bandwidth and stability primarily. The time it takes to configure and setup (properly) is also usually lower with cabled networks.

For many, this discussion is about preferences between wired and wireless. What is best/easiest/most secure between cabled and wireless networks? Having worked several years as ICT consultant and for wireless broadband providers (7 years in total), I feel confident to provide my two cents on the topic. And that is: Wireless can be equally good as a cabled network if done right. And in some cases, be preferred due to its speed of setup and – yes of course – not needing cables. ;)

If you want to dig more into the pros and cons of wireless vs. cabled, read my second blog "Network basics for media server operators, part 2" or head over to Linksys which has an article about it that I recommend.

MIDI, Musical Instrument Digital Interface, is a technical standard (protocol, interface and connectors) developed in the 1980s that allows electronic instruments and other digital tools to communicate. Before the 80s and the development of MIDI, there was no standardized way to synchronize devices and instruments manufactured by different companies. MIDI was developed in the first years of 80s and in 1985 it was published at the Summer NAMM show).

If you want to understand MIDI better, MusicRepo has a great article on how MIDI is used and what it is. As regards media servers, MIDI is mostly used to have a MIDI-compatible device sending control commands to the server.

DMX, Digital Multiplex, is a digital network communication standard, most commonly used in the lighting world, to control equipment such as dimmers, moving heads and effects devices, for example, fog machines. The digits "512" refer to the number of usable data bytes that can be sent in a packet (a DMX universe).

DMX is one of the communication standards a media server operator needs to know. To read more about DMX, I shamelessly recommend you read my article “How to understand DMX and avoid potential pitfalls.”

Art-Net was created by Artistic Licence to overcome the channel restriction of DMX while still utilizing its structure. Art-Net is a communications protocol for transmitting multiple DMX universes using the DMX512-A lighting control protocol on an Ethernet or a wireless network.

Like DMX, Art-Net is used to communicate between devices such as lighting fixtures and a light desk or a media server.

Why do you need Art-Net if it is transmitting the DMX protocol? Why not use DMX only? The benefit with Art-Net is that you do not use the proprietary DMX cables and connectivity, you use the network (Ethernet or wireless). It allows multiple DMX universes (within limits) to be transported over a single network cable using the Ethernet technology.

If you want to dig deeper on Art-Net, check out the Art-Net website by Artistic Licence.

Timecode is a technology used to synchronize frame-accurate playback in media servers. Timecode can be defined as a sequence of numeric codes, which are generated at a regular interval of time with the help of a time synchronization system. Timecode is used in show control (media servers) video production and other applications that requires temporal coordination.

The SMPTE (Society of Motion Picture and Television Engineers) family of timecodes are almost universally used in film, video and audio production, and have several different formats:

Read more about Ttimecode at Filmmaking Lifestyle – they have a great article that really zooms in on the topic.

We've got two more articles to go before we are done with system setup. In the next article, I will cover networked video and audio standards before we finish up with a piece on capture, input feeds, etc. Stay tuned for articles about show programming, live tracking and projection mapping, third-party applications, troubleshooting and a bunch of advanced topics during 2020 and, most importantly, stay safe! 😎