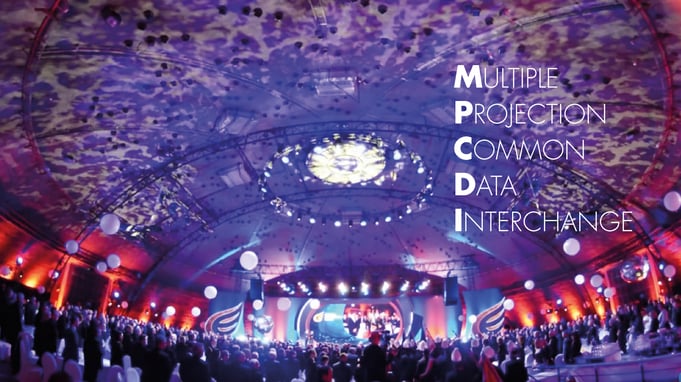 We all love an acronym and here's one that seems to be popping up more and more. MPCDI is a standard format for multi-projector alignment systems, allowing full integration among a range of devices, programs and display systems. But what does that mean in reality, and why are industry standards important?

In this article, we’ll cover the following topics related to Multiple Projection Common Data Interchange (that’s MPCDI to us!)

What is a (technical) standard?

There are several variations of standards, but in this case, a technical standard is an established and formal document that defines a uniform engineering or technical criteria, methods, processes and practices.

It contrasts custom methods, normal use (conventions) and company products or corporate standards – even if they are so frequently used that they are referred to as de facto standards.

In an earlier blog post, I wrote about how standards are developed by independent organizations such as AVIXA, in close collaboration with industry experts. Behind the MPCDI standard you'll find the Video Electronics Standards Association. VESA has a long history of forward-thinking when it comes to creating a stable foundation for technology. Founded in 1989, it is responsible for computer and other visual display device standards. The organization’s objective now also includes standards for video peripherals and accessories (even down to the hole pattern on your TV mount).

MPCDI (Multiple Projection Common Data Interchange, as mentioned) was developed by the Multi-Projector Automatic Calibration (MPAC) Task Group at VESA and released in July 2013. In 2015, the standard was updated and released as version 2.0. Follow the link here to download the standard for free.

The latest update includes a number of changes intended to reduce color differences when blending multiple projectors in a seamless image, enabling greater performance with respect to color consistency, brightness and intensity.

To shape the picture to fit a screen, or to fully cover an object, the projected image needs to be modified to match the shape of the image content in the signal. This is called warping or geometrical correction of an image and can be a tedious, complex and challenging process. Among the most challenging installations of this kind is typically a dome, where you can have anything from 3 to 30 (or more) projectors to create a seamless canvas. You can read about some other mapping applications here!

When introduced in July 2013, the MPCDI specification standardized these techniques across multiple manufacturers’ hardware and software offerings. Version 2.0 of the MPCDI Standard builds on the initial version, but expands it to include color correction, so that projectors that are blended together can also be automatically color-matched – regardless of brand, projector type or projector technology. The new additions to the standard include: color definitions and color XML specifications, allowing DLP projectors to also benefit from 3D look-up tables for color correction.

The press release from VESA on the advent of version 2.0 quoted task group member Bei Yang, creative technology executive, Walt Disney Imagineering Research & Development, Inc, on the importance of the update: “Multi-projection systems are a cornerstone technology for a growing number of markets. These include high-end entertainment venues, military and other training simulators, and air-traffic control systems, as well as emerging virtual reality environments. With Version 2.0, we can bring more stability in both geometry and color quality than ever before to projection used in our theme park attractions.”

What can MPCDI be used for?

As noted above, the process of installing numerous projectors to achieve a seamlessly blended and geometrically corrected image can be a challenge. I have personally spent far too many hours in front of a computer trying to accurately adjust the pixel positions of the images from a host of projectors. Not to mention the further challenge of calibrating/matching colors on those same projectors.

The time it takes to install and maintain a high-quality image is dramatically reduced when image generators, media servers and automated camera calibration systems have a common standard which allows them to speak the same language. And when time is reduced, so is cost…

But it is not only large and complex projection systems that benefit from a standard such as MPCDI. Full integration between different systems is good news for any kind of multi-screen projection system, ranging from a single projection on a specific screen, to a blended rear-projection system used as an information kiosk in a corporate reception. "The multi-projector era has arrived!" as collaboration solutions provider Mersive noted in regard to MPCDI.

There are several systems that support MPCDI, ranging from the signage player manufacturer Brightsign, through media servers from Dataton, dome-specific playback systems from 7thSense Design to auto-blending and alignment systems from companies such as Domeprojection, VIOSO, Christie Digital and others.

I believe that standards play an important role* in driving and developing the AV industry. If you do, too, why not hop aboard the certification train and get yourself educated on the industry standards that are relevant for you!

* Read my previous blog about standards and certification here!

Lead image: The still is taken from a multi-projector show by Grupa e4e at the domed Alvernia Studio buildings in Poland. See more in the video!