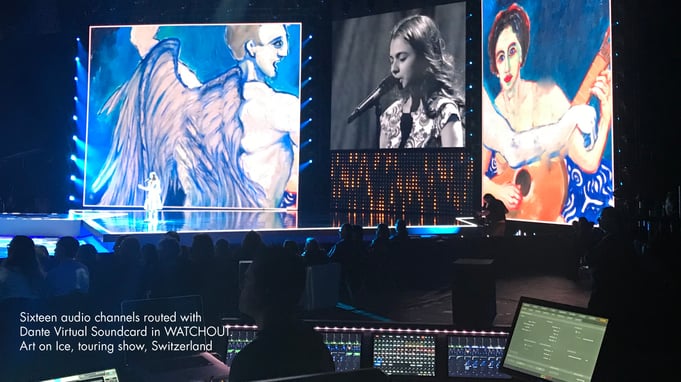 Network audio solutions have been around for many years now, but here’s one that seems to be gaining more traction than most. Dante has been adopted by many vendors who wish to include this kind of interface with their systems, either as fully integrated ones or standalone solutions.

The Dante story dates back to 2003 and Sydney where a small group of engineers, fresh from designing new technologies for Motorola Research Labs, secured backing from the National Information and Communications Technology of Australia (NICTA), a government research institute with a remit to nurture innovative technology. The project would focus on Digital Audio Networking, the fundamental audio networking technology behind Dante, and Aidan Williams (co-founder and chief technology officer at Audinate) was the driving force.

Williams had previously worked on advanced networking technologies including zero-configuration IP networking (he holds some 20 related patents), IPv6, reliable multicast, mobile adhoc networking and residential gateways. When the company was spun off in 2006, it was Williams’ approach as an IT professional and interest in music that would define the way forward for the new company.

That is exactly what I asked myself back in 2013 when I first came across the standard and one of my industry colleagues suggested that we use this network interface on a project. Five years later, we are still debating how to pronounce it! Anyway, let’s not get into that now...

I’m still a big fan of analogue audio. But I recognise that the distribution in this way of working has massive limitations and can be very difficult to fault-find at times. The advent of digital mixing consoles has meant that a lovely multicore audio snake and a stage box for live events, really doesn’t work anymore.

Digital Audio Network Through Ethernet (DANTE) is manufactured by Audinate and is a multi-channel, low latency transport system of distributing digital audio over a standard network. It is completely scalable from a single mixing console to a large auditorium and it is easy to reconfigure for different applications.

Simplicity of operation has to be the overall target here. It will save so many helpdesk calls and call-outs from integrators and manufacturers if the usability of the system is as straightforward as possible.

Folks, we need to get one thing clear here. Audio over Ethernet (AoE) is the technology that uses Ethernet-based networks to distribute digital audio. It is not Voice over IP (VoIP) and could not be further from it in many respects. Dante has been designed as a high-quality method of digital audio distribution in an uncompressed format which is suitable for broadcast applications as well as high-end AV ones. Because it is a fully digital system, you don’t have to worry about crosstalk between cables or signal degradation when used over longer runs.

VoIP systems are primarily used over a broadband connection as a replacement for an analogue telephone service. This kind of protocol can also be found in Skype and many other computer-based applications. The audio quality available from a VoIP system is adequate for conference calls, etc, but it is absolutely not suitable for high quality distribution across a network. AoE is in a completely different league altogether.

Dante Controller is a free software application for Windows and Mac OS X that allows you to set up and manage audio routing in a Dante audio network, and configure your Dante devices.

Dante Via is a piece of software that delivers routing of computer-based audio, allowing a wide range of applications and devices to be networked and interconnected.

Dante Virtual Soundcard is an application that connects desktop audio applications to the Dante network. As its name implies, it’s a virtual soundcard that creates a Dante audio interface using your computer’s existing Ethernet port — no additional hardware is required.

Using Dante Virtual Soundcard, a computer can integrate into the network as a Digital Audio Workstation for multitrack recording and playback, as a playback device for consumer audio applications (e.g., iTunes, Windows Media Player), or as an audio interface for Skype or other conferencing applications. Dante Virtual Soundcard supports ASIO and WDM on Windows and Core Audio on Mac OSX.

Dante Domain Manager is a piece of network management software that enables user authentication, role-based security and audit capabilities for Dante networks, while allowing seamless expansion of Dante systems over any network infrastructure. A complete management system of your digital audio network system if you will.

When Dante first appeared on the scene, I think it would be reasonable to say that there wasn’t a massive uptake from the main professional audio vendors. Not initially anyway. Maybe it was because they saw Dante as a distraction from what they were already offering, or perhaps they were fully committed to other network formats. Whatever the case, it seemed to be taking a while for adoption.

However, here we are in 2018 with a long list of licensed manufacturers and an ever-growing popularity in the marketplace. I don’t think for one minute that it’s a case of vendors jumping on the proverbial ‘bandwagon.’ Far from it. They clearly see Dante as a fundamental addition to the functionality that they can offer and I would have to say that Audinate have done a first-class job in getting these people onboard. Dante has certainly made a massive impact upon the professional audio business and is very much here to stay!

Lead image courtesy Art on Ice, with thanks to PlanB Solutions. Read more about the technology in Art on Ice here.