What is 12G SDI and what are the benefits? 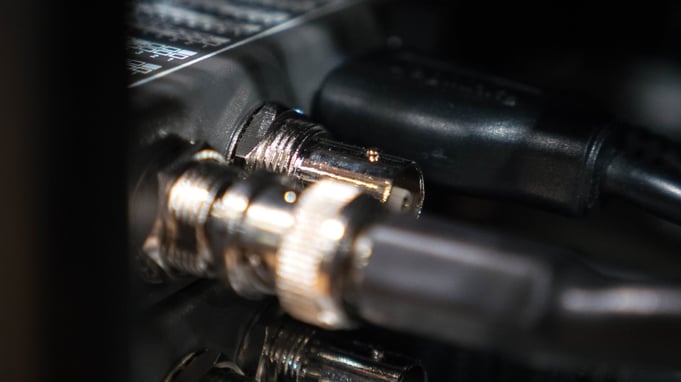 With the demand for higher bandwidth (4K, 8K …) in applications such as broadcast, live events and fixed installations, the SDI standard has continued to evolve. There are now a wide range of products supporting 12G SDI in the market. But what is SDI, 12G SDI and why should I care?

SDI (Serial Digital Interface) is a family of digital video interfaces (SDI, HD-SDI, 3G SDI, 6G SDI and 12G SDI), that was first standardized in 1989 by SMPTE (The Society of Motion Picture and Television Engineers). The standard has been widely adopted by the broadcast industry, and is used for transmission of uncompressed, unencrypted digital video signals in TV studios and facilities. In the live event industry, SDI is also a trusted technology – due to its rugged connector as well as signal distribution lengths. Recommended reading: What is SDI? 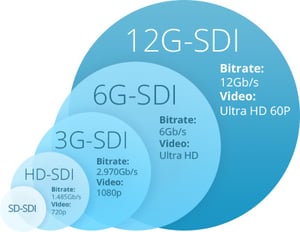 As the world changes, so has the SDI standard. Additional versions of the SDI standard have been developed to support continuously increased resolutions (HD, UHD, 4K, 8K), higher bitrates and more colors. The latest additions to the SDI family of interfaces made their debut in March 2015, when 6G SDI and 12G SDI standards were published. 12G is now ready for mass market and there are numerous products supporting it.

The 12G SDI standard was introduced simultaneously with the 6G SDI interface in 2015. It was revised in 2018 (ST 2082-10:2018) and has support for Standard Dynamic Range (SDR) and High Dynamic Range (HDR) Source image formats into a single or multiplex 12G-SDI 10-bit interfaces. Since higher bitrates are part of the standard, 12G SDI supports 4K 60 from a single link and 8K 30 from a dual.

What are the advantages of 12G SDI?

SDI has a number of advantages compared to other interfaces and standards for transmitting professional video and audio. In the earlier blog I wrote about SDI, we covered the following benefits of SDI:

To top this, I want to throw in a few more benefits of SDI vs competing standards:

The SDI standard offers uncompressed, latency-free distribution of signals over the coaxial cable with cable lengths that are unrivalled by the competition.

SDI also supports ANC (ancillary data) which is used in broadcast systems. These data packets are distributed in either the vertical or horizontal blanking region of the signal.

And last, but absolutely not least, the cost of an SDI cable is typically lower than comparable cables such as HDMI, since the SDI cable is a standard coaxial cable (RG-6).

In addition to the above-mentioned support of higher resolutions in 12G SDI, 12G reduces system complexity in a 4K workflow. Instead of 4 x 3G SDI cables to get 4K, you need a single 12G SDI cable.

Many manufacturers have 12G products and you find them in converters, video cameras, production switchers, as well as a growing range of PCIe cards.

I’ve listed a few of the manufacturers here:

12G is Great, But Could It Be Better?

Yes, sure it could. It’s one thing to have 12G input, but another to have a system that is flexible and can support both in and output (bidirectional SDI interface). Deltacast has brought a highly innovative solution for 12G SDI capture and playout to market. Their DELTA-12G-elp-h 2C has eight independent channels that can be used either as inputs or as outputs. Two channels support up to 12G SDI and the others up to 3G SDI.

There are many applications where a bidirectional SDI interface adds value, and the media server market is a prime example. It’s especially true for the rental, staging and live events teams, where no two gigs are the same. A media server with the flexibility of combining 12G and 3G, having them as inputs on one gig and outputs on the other – now that is unrivalled flexibility!

If you want to read about Dataton’s SDI servers with bidirectional interface, head over here…. (Shameless product ad!)