The science of color and light 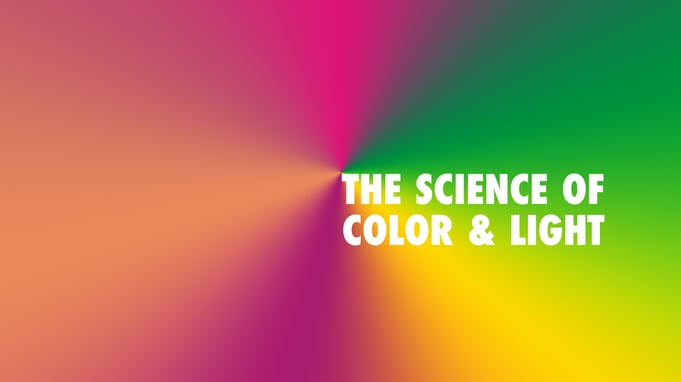 FROM TUBE TO LCD

Being a child of the seventies and eighties, I got my introduction to color theory from the popularization of color TV. Color TVs produce their full range of color using a three-colored system. Back when TVs had tube screens, the tubes had three electron guns that shot electrons at different colored phosphor sub-pixels, red, green and blue, tightly packed together to form a single color pixel. The electrons would excite the phosphor making it glow.

Today, screens are made from LCD or LED arrays, but the method still applies. Every color LCD pixel on a modern TV, computer monitor, or phone screen is made of three sub-pixels: red, green, and blue. New colors are created by varying the intensity of each of these sub-pixels, making the pixel the desired color.

Back to Newton's Theory of Color

To understand the difference, let’s take a look at Newton’s Theory of Color.

Before Isaac Newton’s Theory of Color in 1666, people believed that sunlight, or white light, was simply pure light and something needed to be added to it to create color. 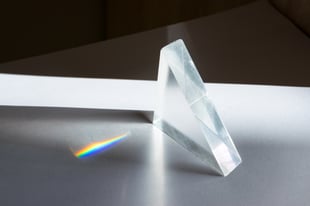 Newton’s theory came about when experimenting with prisms. The fact that prisms created many colors when struck by white light had been known for many years. Newton was the first to project these colors over a long distance. In fact, he projected the rainbow of colors 22 feet across his chamber to an opposing wall. At that distance, the original round white light had stretched five times more in one direction and displayed a series of colors in the extended direction. From this, Newton concluded that sunlight is actually composed of many different colors and those colors refract or bend in different amounts when going through the prism. Blue refracted more than yellow, which refracted more than red.

To test his observations further, he isolated a single color of light produced by the first prism and had it go through a second prism to see if a new set of colors would be produced as was believed at the time. The colored light coming out of the second prism was the same as the color going in. This convinced Newton that sunlight is a mixture of other colors, that refract at different amounts and can be separated into a continuous spectrum of colors, and that opaque objects appear to be certain colors because they reflect those colors and absorb the rest. In other words, a red rose absorbs all the other colors of light except for red which it reflects, making it look red. This is also true for gel.

The thing to notice about the two types of color mixing is that the primary colors of one (for example, the red, green and blue of additive mixing) create the secondary colors of the other (cyan, magenta, and yellow of subtractive mixing) and vice-versa.

In the lighting world, we deal with both kinds of color mixing on a regular basis. For example, in a conventional rig (one that does not have color mixing fixtures like moving lights or LEDs) lights are colored with gel and then layered and mixed on stage to create new colors. This is additive color mixing. A commonly used color palette in conventional lights is to mix amber light with blue light. Since amber is a secondary color of red and green (with a little more red than green in it) the resulting mixed color on stage is a warm white light. The warmth or coolness of this lighting look can be controlled by the intensity of light you are mixing. A cool look would have the blue light at a higher intensity than the amber, and this would be useful for a night scene. Conversely, pushing the amber up higher than the blue would create a warmer look that could be the early light of the following morning.

With the introduction of moving lights into the lighting world, the use of subtractive mixing became much more common. This is because the color mixing schemes of most movers involve starting with white light and removing colors along the optical path.

Movers with color mixing ability use a cyan, magenta, yellow (CMY) mixing system. Mixing color in a moving light is like mixing paint. Of course, once you have the mixed color coming out of the light, you are back to additive mixing on the stage. 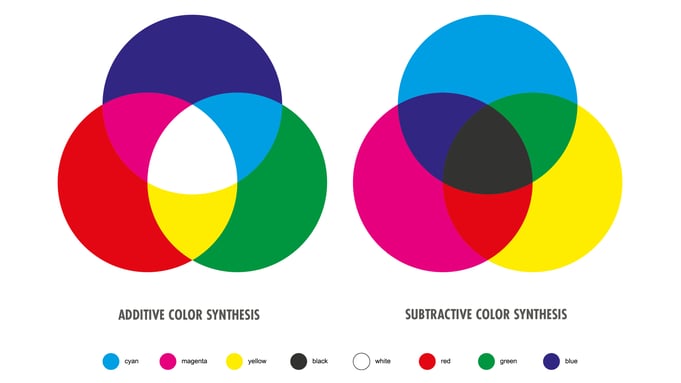 Most LED fixtures, whether moving or otherwise, use the additive RGB method of color mixing at the fixture. There are, however, some LED movers that create a white light and use the subtractive CMY method for mixing in the optical path.

The road to lighting utopia

With all the options for color mixing at the fixture you would think it would be lighting utopia, but there’s a catch.

It’s true that the designer has a lot of options with color mixing fixtures, but sometimes the perfect color is not obtainable.

Gel manufacturers create thousands of variations of color using the entire spectrum of visible light. Color mixing on the other hand whether it’s RGB or CMY is missing small pockets of color between the three primary colors and this causes a loss of nuance. For example, it is difficult to mix a rich red in a CMY fixture or to create a really nice amber in an RGB fixture without it looking a little green.

In CMY fixtures, the manufacturers compensated for this by adding color wheels stocked with harder-to-create colors like red or congo. For RGB fixtures, manufacturers have added a fourth color to the LED array, either white (called RGBW) or amber (RGBA), to fill in those pockets of the missing color spectrum.

THE IMPORTANCE OF COLOR TEMPERATURE

Finally, we should have a discussion about color temperature because it affects the color of the light coming out of the fixture. If you were to look up the definition of “color temperature” on dictionary.com, you would find the following:

noun Optics, Photography.
1. a temperature defined in terms of the temperature of a black body at which it emits light of a specified spectral distribution; used to specify the color of a light source.

This definition is not entirely helpful. What is this “black body”? A black body is a theoretically ideal radiator and absorber of energy. It gets its name from the fact that when it is cold, it is black. Think of a piece of metal that when cold, appears completely black. Now imagine that piece of metal heated up like a filament in an incandescent light bulb. As the temperature rises, the metal will emit light starting in the deep amber range, into the yellows, then whites, and blues.

A simpler description of color temperature is a method of describing the color characteristics of light.

Since LED and fluorescent fixtures generate light differently than incandescent fixtures, they do not follow the form of the black body spectrum of light and are assigned a correlated color temperature (CCT) based on a human perception of the color emitted from the lamp. How LEDs work, however, is a conversation for another day.

For the lighting designer, knowing and understanding that the color characteristics of fixtures’ unfiltered “white” light will be different depending on the light source will be helpful when trying to match colors. This can be used to our advantage when looking for a subtle contrast on stage.

Next time you need to evoke a specific emotional response, remember that sometimes the art of theatre is about the science of color.

Reprinted with kind permission of Michael Cassera and TheatreArtLife, a platform for industry professionals from all live entertainment genres to connect and learn from each other!

Don't stay in the dark about lighting 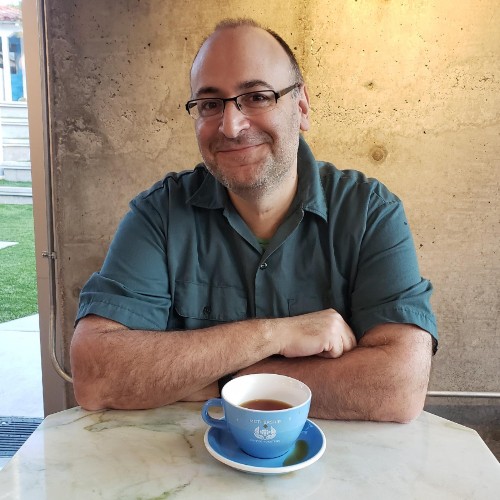 Michael Cassera enjoys a twenty-seven-year long career with Cirque du Soleil spanning three of their long-running resident shows: Mystère, Zumanity, and LOVE. With Cirque, Michael has worked as a Followspot Operator, a Board Op., an Assistant Head, and Head of Lighting. He is currently the Technical Manager for Mystère.