The history of projection is entwined with that of illumination – after all, every projector needs a light source! In this blog, we turn the spotlight on lamps, from the gas discharge models of the 1800s to today's laser technology. 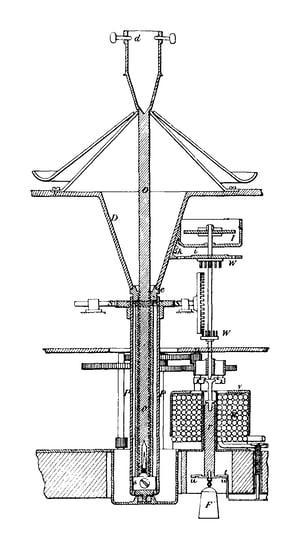 The concept of carbon-arc lamps was first demonstrated in the early 19th century (the illustration shows the Staite/Petrie proposal from 1847). Arc lamp technology was one of the first commercial uses for electricity. The   An arc lamp produces light by an electric arc (also called a voltaic arc), and an arc is the discharge that occurs when a gas is ionized. The term is also used for gas discharge lamps, which produce light by an arc between metal electrodes through an inert gas in a glass bulb. The fluorescent lamp is an example of a low-pressure mercury arc lamp.

While carbon arc lamps were used in projection systems, it is the xenon arc lamp (a gas discharge lamp, that produces light by passing electricity through ionized xenon gas at high pressure) that is most known today. The xenon lamps are widely used in cinema projectors and other high-brightness projectors. While currently being replaced by laser projectors, xenon is still by far the dominant illumination technology in the cinema projector install base.

The benefits of xenon lamps are a short start-up time, wide and evenly distributed color spectrum which tracks well to natural sunlight, and it is the brightest lamp technology available. On the downside, xenon has a short life span and it is expensive.

The metal halide lamp is a technology developed in the 1960s. It is an electrical lamp that produces light by an electric arc through a gaseous mixture of vaporized mercury and metal halides. The lamps are referred to as mercury vapor lamps and were widely used in projection systems before being replaced by Ultra High Performance/Ultra High Pressure lamps.

The ultra-high-performance lamp is a high-pressure mercury arc lamp most commonly known as ultra-high-pressure lamp (UHP is a Philips trademark). Unlike other lamps used in projection systems, it is not a metal halide lamp, but uses only mercury.

For projection, the performance of these lamps is well known and yields predictable operation. They can be used as stand-alone lamp configurations or in projectors with up to six lamps – to increase brightness. The lamps run up to 4-5000 hours, but most typically have a 2000-hour life span. The lamp requires a certain warm-up time and while the xenon lamps have a great and distributed color spectrum, UHP lamps have pretty poor distribution of energy in their color spectrum. It is wide, but unevenly distributed.

The first LED projector in the market was the FL32 from projectiondesign. It had about 400 lumens, but with recent developments in LED technology, projector manufacturer Norxe have brought to market a LED illuminated projector with more than 4 000 lumens, using the high-lumen-density ColorSpark HLD LED technology from Philips.

With the initial low-level lumen output, the LED projectors were typically used in niche applications, such as simulation, where the longevity and heavily reduced need for maintenance (the projector could run up to 32 000 hours before maintenance, with a light source capable of running 100 000 hours – or 11.8 years in 24/7 operation) were more important than the limited brightness output.

When used in DLP® projection systems systems, the driving of the LEDs enabled the projector manufacturers to remove the color wheels, eliminating a weakness in the DLP one-chip projectors.

Some challenges were also introduced with the use of LED as an illumination source, such as its narrow bandwidth and optical design in systems using optical blends, where color refraction created unwanted artifacts. Design changes in the optical blends removed this limitation.

Later, LED made its way into projectors as one of two light sources in a hybrid illumination system. The first projector to market with a combined illumination source using LED and laser phosphor, was Casio's XJ-A130 in 2010 (and other models based on the same platform). The unique quality of this projector was the combination of technologies to create the colors: red was made from a native LED, blue by a native blue laser and green was created by converting the blue laser through phosphor. It was announced with 2500 lumens and 20 000 hours illumination life span.

One of the most common and affordable illumination technologies today is laser phosphor, and most projector manufacturers have released laser phosphor projectors. They are typically designed with a cluster of blue lasers, where red and green is created from yellow phosphor, or with red and blue laser, and yellow or green phosphor. This varies among manufacturers.

The first projectors released with laser phosphor as the illumination source were typically around 6-7000 lumens, but this has been pushed to 32 000 lumens in the Barco UDX.

Key benefits of the laser phosphor projectors are the life span of illumination source, typically at 20 000 hours and the possibility of 360-degree installation (all axes).

Laser projection (both pure laser and laser phosphor) has a number of benefits. Let’s take a look at the most impactful ones here:

In addition to the above-mentioned power efficiency, there are other advantages with laser/laser phosphor. With lower power consumption, you dissipate less heat and reduce the need for ventilation and cooling. And not to mention the fact that xenon lamps also are built with hazardous components.

For further reading related to the environmental impact of laser/laser phosphor , I recommend the following links:

Reduced operational cost is the major benefit of laser projection (or any solid state light source for that matter such as LED), as there is no need to swap lamps every 700-1000 hours in cinemas, or 1500-2000 hours in other applications.

Naturally, this will have a major impact on the operational expenses of running a projection system, as all projection investment will be moved to capital expenditure - the money a business spends to buy or invest in new goods.

For a lot of companies this is good, but there are other companies and organizations that for various reasons want to keep higher operational expenses. Perhaps this will drive new business models into the projection market, such as leasing and long-term equipment rental?

At the moment, the choice seems to be among laser, laser phosphor and LED in my book. And how to select what's right for you? It all comes down to the application and where you aim to use the projector. Good luck!

(Parts of this were published in an earlier blog!)