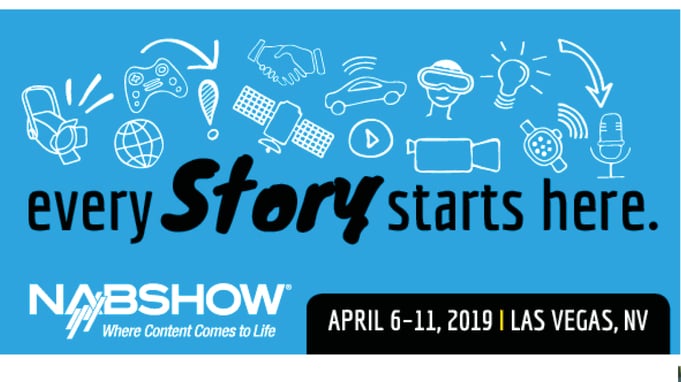 Welcome to NAB 2019: bigger, better, faster and more, more, MORE! David Aleksandersen reports from the world's largest trade show for the convergence of media, entertainment and technology, focusing on the broadcast sector of the AV industry.

From the NAB site: “With more than 90,000 attendees from 160 countries and 1,600+ exhibitors, NAB Show is the ultimate marketplace for solutions that transcend traditional broadcasting and fuel the digital storytelling economy. From creation to consumption, across multiple platforms and countless nationalities, NAB Show is where global visionaries convene to bring content to life in new and exciting ways.”

This was my first NAB show. In the past 15 years, I have attended trade shows all over the world, but until now, never NAB. I set off to walk the mile-long show floor with some excitement (believe it or not!) and it did not let me down. Lots of cool products, interesting seminars and presentations – so let's get started.

I took the same approach to NAB as a regular AV trade show, like Integrated Systems Europe or InfoComm, as I have no strong background from broadcast.

I have earlier written about the race for higher resolutions - it can be a good background read before you continue.

When most service providers and users are used to 4K, it is of course time to up the ante. Here comes 8K! With 4K being 4 x 1080, 8K is of course 4 x 4K – which means a lot of pixels! In fact, so many as 33 million of them, and when you realize that the content needs to be updated at 60 frames per second, we are talking about 2 billion pixels per second.

That is a LOT of data to be moved through an entire workflow, from acquisition, through post production, to delivery to end-users.

With most manufacturers of displays now having at least one 8K model in their offering, it was interesting to see how much focus there was on high-end and high-resolution workflows for post-production and VFX. Companies like Adobe, Sony, Avid and Autodesk already have solutions for this in place and they are not alone.

But seeing so much cool stuff ready for 8K, it's frankly disappointing that content distributors are just not there yet. I'm writing this post in Norway and the availability of 4K/UHD TV channels is scarce, bordering on non-existent, for example.

Perhaps the worst part is that the quality of broadcast 4K is poor, with compression challenges. I would still prefer a very high quality 1080p signal over a compressed 4K one… That brings me to a pretty straightforward conclusion: we have barely mastered 4K and 8K is still fairly futuristic.

With that said, NHK (Japan Broadcasting Corporation) started broadcasting 8K late 2018. They are now gearing up for the 2020 Tokyo Olympic Games where 8K distribution will no doubt reach its first major peak.

16K in its infancy

So 8K may still be in the future, but that doesn't mean the hunger for greater resolution has been assuaged. 16K is of course the next natural step and will boast a tremendous 4x8K resolution – 132 million pixels (per frame!).

Panavision's senior VP in innovation, Michael Cioni, told Hollywood Reporter that 8K will be adopted and envisions a future where Hollywood moves to 16K.

But, considering the time it took from talking about 4K (Sony introduced their first 4K projector in 2012…) to almost doing 4K (now), it could be a while (understatement of the year?) until 16K is there. 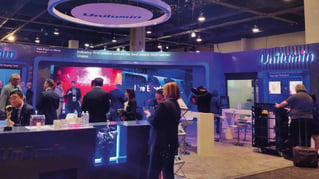 Anyone who has visited a traditional AV show over the last few years cannot have failed to notice the ever-growing popularity – and size and quality – of LED wall products.

At NAB, there were many major LED-manufacturers present such as Absen, ROE, Designled, Unilumin, Leyard/Planar, and Aoto. LED has found its way into the broadcast world and another buzzword at NAB was HDR.

I believe all LED manufacturers now support HDR in their products. While it will take time before content and the distributed content have HDR, it's clear that the display business is serious about new exciting technologies.

Read more about HDR in our blog post about HDMI 2.1 here.

One of the hottest infrastructure technologies at NAB was 5G. The buzz is hitting new heights at the moment and it's understandable. 5G will deliver higher bandwidths (20-100 times faster than previous technology) and lower latency, but it is probably at least three, perhaps even four or five years until we have mass market adoption. Telenor, the Norwegian telecom company, has a pilot and plans to go live with a commercially available 5G network in 2020.

Not all infrastructure is wireless and the majority of the work in a broadcast, live event or any media-server related installation is done through old-fashioned wires. Wired infrastructure was not really visible at NAB – maybe because it is just not as sexy as the new wireless stuff?

In my opinion, it is absolutely needed. After all, no wires – no fun. ;)

Production workflows are getting cloudy (and smart?)

In addition to the focus on 8K production workflows, many companies saw their opportunity to bring in another buzzword – Artificial Intelligence (sometimes referred to as Machine Learning). Several companies presented their software solutions (cloud-based, of course) enhanced or powered by AI (or Deep Learning, which is a methodology of machine learning).

However… They had really a hard time explaining what their AI systems did compared to the regular systems without AI. It seemed almost as if companies had found a way to incorporate a few deep learning algorithms just to be able to promote their system as AI… Darn marketeers!

Since I am not here to make myself unpopular, I won't name names. But I did actually speak with a few senior software developers/managers and, after long conversations, they could not really point out what those algorithms added of value.

On the show floor, there was one company that somehow managed to use all of the following terms to market what seemed to be a regular software solution without any wow factor:

From this solid list of buzzwords, the only one I really lacked was “Blockchain”. Even without Blockchain, they were the winner of the buzzword bingo at NAB!

Even with some marketing gimmicks by exhibitors, NAB 2019 was an interesting show. The focus was on higher resolution, faster and more reliable transmission, as well as high-quality playback of content whether it was a LED wall or a regular 8K display. I enjoyed my visit to NAB – and, most of all, the many stimulating conversations I had while roaming the halls. Looking forward to NAB 2020 already!