Is there anyone out there… Digitization & the unmanned booth 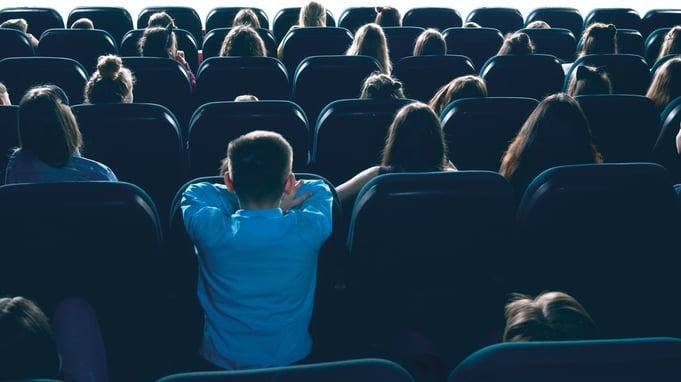 As movie theaters experience their usual holiday upswing, guest writer Tom Bert takes a look behind the scenes: at digitization in the cinema, its effect on operation and the unmanned booth!

Operating a cinema has evolved a lot since the days of 35 mm projection. Digitization arrived with the promise of greater automation and some exhibitors have already applied the "unmanned booth" scenario where cinema staff work in the lobby, ticket sales or auditorium. In this blog post, we focus on how to organize your booth so that you never have to enter it again.

To start off, I want to make it clear that operating an unmanned booth is not the same as not having a projectionist. If cinema compares to TV as fine restaurant dining compares to a microwave meal (and it does, according to me), then the value of a good chef in the kitchen is not to be underestimated. The quality of the movie-going experience defines the perceived value of the movie-goers. The chances of people coming back soon (and buying that big bucket of popcorn again) are defined to a great extent by their previous experience. Exhibitors should carefully monitor and control the movie-goer's experience. Since the actual screening is a big part of that, there should be a "chef" in the kitchen making it the best possible serving. It doesn't matter if we call that person the projectionist or show manager. What matters is that he or she has the tools to focus on the most important parts of the job: where most value is created for the movie-goer.

If we zoom in on the actual movie screening, that value is created in the auditorium with on-screen image quality, audio quality, size of the screen… and of course content. Remember, all that gear in the booth is only there to create an optimal experience on the opposite side of the porthole window. If everything is set up and operated properly, the show manager shouldn't be worrying or busy with what’s happening behind the scenes. In an ideal scenario, he/she unlock the doors in the morning and then, throughout the day, the correct movies are automatically screened in the correct auditorium. Maybe the next time a new employee is shown around the building, the show manager will get a reminder that there is little room in the back of the auditorium with a lot of smart technology, making the magic happen. Enter: the unmanned booth.

All nice and dandy, but WHY would you like to do all this? There must be a reason why booths have been manned throughout the biggest part of cinema history, so why do it differently? It all has to do with being efficient in time and space.

Let’s continue our bold brainstorm: what would it take to have a truly unmanned booth? A location (room, box, space) where all the magic happens to create the best-possible movie experience… but where you don't have to be, once it’s installed.

Very basically, the operational actions on a cinema projection system can be broken down into three categories:

Maintenance actions are generally pro-active, not part of day-to-day operation. Typical examples are cleaning the unit from dust. You might think that it’s impossible to match this with the unmanned ambition, since typically these maintenance actions require physically touching the device. That is true, but there are ways to be smart(er):

Service operations are performed on the projection system reactively, not as part of day-to-day operation. These are typically ad hoc, not-planned-for interventions. For this kind of trouble-shooting, remote connectivity is the standard way of working today. Accessing the system from outside the booth lets you perform fixes within scope of the software functionality. (Repairing or replacing hardware without entering the booth is only for true magicians!). However, you can improve the behavior and service method by trying to prevent and predict errors. Just as facts-based maintenance relies on internal sensors and intelligent processing of the measured data, you can apply the same principles to detect when, for example, temperatures start to rise and then use it as indicator to prevent problems. Note that it’s not only a matter of stuffing the system with measurement devices: the collecting, processing and interpretation of the data is at least as important.

It's all about the interface

Cinema owners or managers who want to focus on creating value for the movie-goer can gain a lot from reducing behind-the-scenes work on booth equipment. Aiming and designing for the ultimate – a truly unmanned booth – can yield real-estate and resource benefits, all things immediately impacting top and bottom line.

On the road to the unmanned booth, it’s all about providing proper interfaces that are open and effective.

Interfaces should be open and agnostic: in order for the projection system to complete disappear behind the scenes, it should transparently integrate with peripheral devices. These devices can be building management systems (power cycling), the TMS (content and schedule management) or any system that the exhibitors consider crucial in the front-end of his day-to-day operations. This is only possible when the projection system is built from the start with an open and agnostic interface to the outside world: not proprietary, based on standards, maintained and extended by the manufacturer.

Interfaces should be performant: it's only when the interfaces are sufficiently effective, that they will be able to replace the currently non-integrated interactions. Transferring content should be fast, the projection system should be responsive to triggers, multiple users in different locations should be able to work on the system simultaneously…

Enjoy your next visit to the cinema!

Reprinted by kind permission of the author. The contribution was first published on LinkedIn!

4K in cinema: past, present and future?

Tom Bert is a senior member of the product management team in Barco’s Entertainment division, responsible for the digital cinema servers and projectors. Based in Belgium, Tom has international experience in display technology and is a regular contributor to panel discussions on digital cinema. He holds a PhD degree in Engineering from Ghent University.