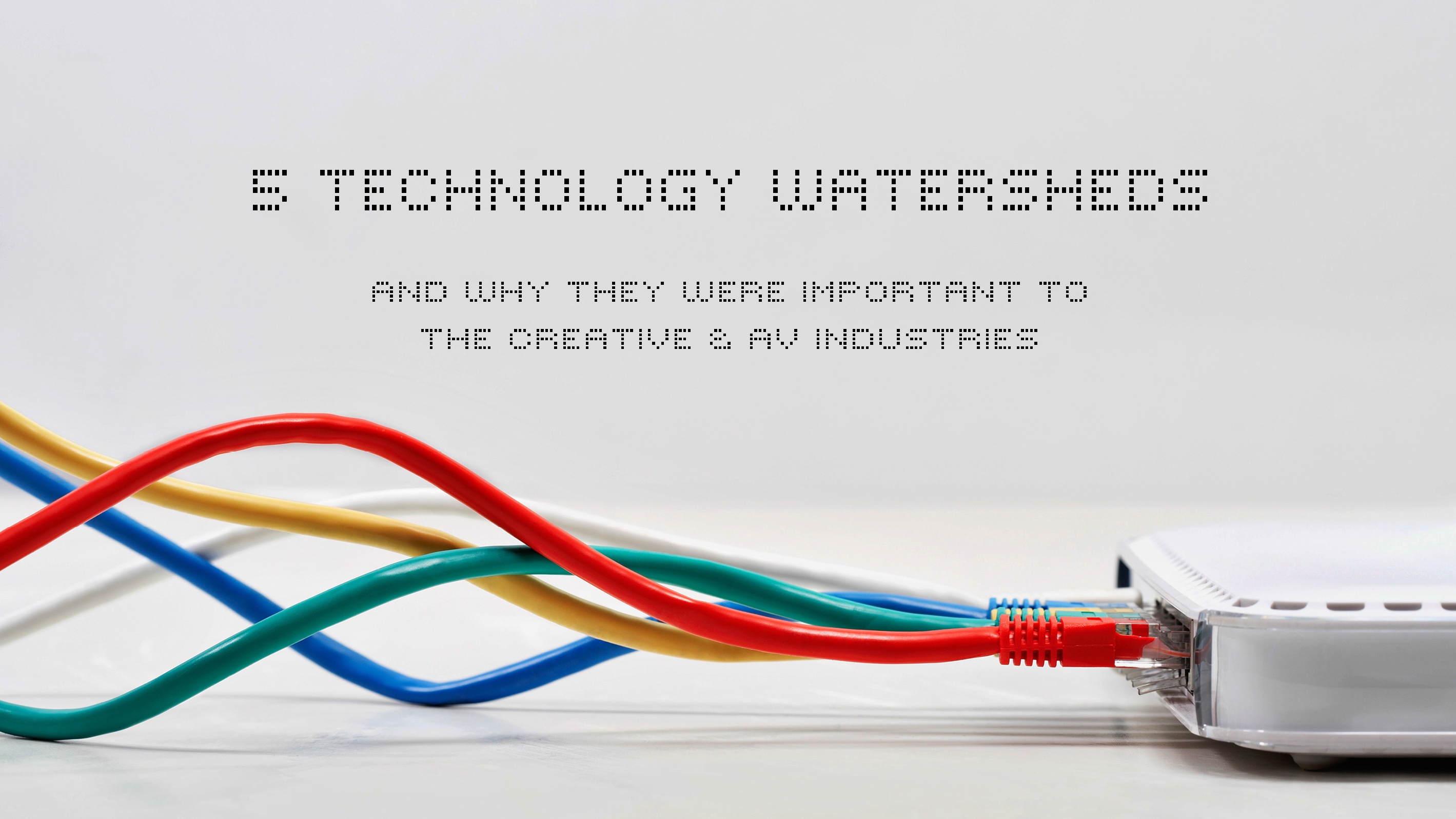 The last few decades have seen enormous changes in workflow, equipment and possibilities. We asked Nevil Bounds which five significant shifts in technology have impacted on the creative and AV industries. Read on and see if you agree with his top five!

The move from analogue to digital has to be the single biggest step forward. It has affected just about everything that we do, both at home and in our professional lives.

As an example, I have just bought Apple’s Final Cut Pro X editing software. It was £300. I bought a semi-professional 4K/UHD video camera earlier this year. It was a little over £2500. I can edit and manipulate incredibly high resolution video and images on a 27” iMac that is just over 3 years old. It was £1200 when I bought it. I also bought a couple of 2TB external drives to assist with some of the large files sizes. They were £50 each. I can do all of my editing in a small room in my house on an IKEA table. I think that was about £100.

These are incredible sets of statistics if you think about it. But this hasn’t just applied to video content origination and editing of course. The very fact that we are now able to do everything digitally has transformed the way that the creative and AV industries work.

I was working in an aviation simulator the other week and we had forgotten to shoot a couple of extra cutaways. ‘No problem’, said the captain that I was working with. ‘I’ll just shoot some extra bits on my iPhone next time I’m in the sim and we can cut that in later.’ And we could. And it would barely look any different to the original footage from my video camera with a little bit of fiddling.

The ‘A to D’ revolution has affected all things to do with the way we use technology in the creative world; video, audio, photography, lighting and effects. The greatest challenge is that those file sizes are bigger than ever!

One of the bi-products of the digital revolution is that hardware has become a lot smaller and portable. Often this means that equipment has to run on battery power which used to be a massive problem "back in the day" but presents few problems today. 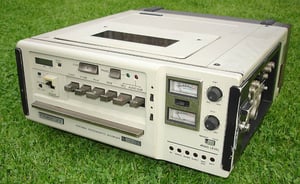 I still have what I call ‘BVU Shoulder’ from the days when I was a video operator and I carried a Sony BVU-110P ‘portable’ video cassette recorder around (see picture). It weighed in at a mere 11 kg, which was seriously lightweight back in the 1980s, but lugging the thing in and out of vehicles and up flights of stairs certainly took its toll on my shoulder!

Today, we have seen an incredible miniaturization of video cameras, all of them with their own built in recorders. Fixed installation of AV and video systems has seen an incredible reduction in the sizes of equipment that is used. Blackmagic Design, Kramer Electronics and Lynx Technik are just a few examples of how vendors have been able to reduce the overall footprint of their products, but have still managed to offer feature-rich levels of functionality.

The microprocessor – and what you can do with it – has played a massive role in reducing kit size over the last couple of decades. The ability for software programmers to build in incredible levels of functionality never fails to amaze me. More often than not, an upgrade is possible just with a license key, or a firmware update, or by inserting a USB stick. We take it all very much for granted now.

I really don’t know where to begin with this subject and it’s impossible to compress the effect of the internet into just a few lines. It has had massive benefits to the AV and creative industries in so many respects and it is hard to imagine life without it.

Again, we take it all for granted. The rather nonchalant language that we use to describe sending a video file to someone: ‘Oh, it’s only a couple of gig, I’ll WeTransfer it to you.’ Only a couple of gig? There’s the revolution, right there. (Other file transfer providers are also available, obviously.)

YouTube has been an incredible game-changer for those wanting to showcase their work to an international audience. There are so many other benefits as well. For example, I have to admit that reading an instruction manual for a product is alien to me and should only be used as a last resort. No matter – today, I can search for almost anything I want to and someone will have posted a ‘how to’ video on their channel. For some reason, this seems a much better way of working because the presenters also tell you what not to do, as well as what you should do, and also any pitfalls that they have encountered. It's not something that you’ll get from a user guide. Most of my Final Cut Pro X learning has been from these sorts of online tutorials.

Then there is podcasting and web-streaming. Incredible to think that you can do this from the comfort of your own home in anything up to 4K resolution if you want and stream live content to the world. For free. This is how my colleagues on the Plane Talking UK Podcast and I put out a show every week. With the use of Newtek’s NDI technology, even though I am 200 km from their base, it looks and sounds as though I am in their studio.

One of my Plane Talking colleagues is on a layover down route at a hotel in Romania. As I was writing this article he sent me an internet speed test from the pool:

‘That’s just the regular Wi-Fi,’ he quipped. ‘You can pay €5 per day if you want the premium connection!’ Wow.

As I am in my 40th year in the AV industry, I think I’m allowed to reminisce a little. How it used to be. How we did stuff.

Doing ‘big video’ meant big kit. Very big kit. I honestly don’t know how we pulled off some of the shows that we used to do with the original video projection systems. It still sends a shudder up my spine to this day. Most notably, the ‘river’ that was created in a London conference centre when an AV rental company forgot to tighten the connecting hose on a laser projector that required 12 gallons of water a minute to cool it. Mixing that with 100 Amp 3 phase mains was interesting as well. I think much paperwork then ensued along with a visit from the fire brigade.

Fast forward to 2018. I was at a meeting the other day when someone pulled out one of those RIF6 pico projectors from their pocket and projected it on to a wall. I sat in my chair with my arms folded waiting to scoff at the failure. Honestly, I could not have been more impressed at the image quality for a product that retails for about $280. Yes, of course, there are going to be things which could be better, but I was really surprised about how versatile it was. My main thoughts were how far we had come from all those years ago.

Now onto the hot subject of large-scale LED display technology. Will it ultimately replace projection? I’m not so sure actually, although all of the projector manufacturers that I have spoken with are quite coy about what their next steps are likely to be. We’re now seeing LED tiled displays in larger boardrooms. That makes you think that it’s not going to be so many years before we start seeing them in smaller installations.

Although the digital revolution in equipment terms has been incredible, there is no question that for very many situations you now need a lot fewer people to achieve the same result.

As I think back to my days in broadcast television, the unions would be in uproar if you sent a TV news crew out with anything less than four or five people. Today, you can do it with one person, and many of the TV channels do this regularly.

No question about it, the ability to create content on your own has never been easier. Is it always better though? Not necessarily. I think that you should always consider using specialist talent for specialist areas, no matter what areas of technology that you’re involved in.

It still takes people to install, commission and program permanent AV and video installations, and I feel that it is vital that these areas are not compromised. While there are many benefits of streamlining the way that some projects are delivered, you cannot replace real people to do some of this work.

The technological advances have been massive over the last few decades, but technology alone can not replace the fantastic pool of talent that this industry has to offer. After all, technology without the creativity and skill of qualified people is just… technology.