on a space shuttle

The California Science Center is home to the space shuttle Endeavour, the NASA veteran of 25 missions. It is also currently the venue for a spectacular exhibition titled “King Tut: Treasures of the Golden Pharaoh.” For the center’s annual fundraising gala, BARTKRESA studio and tech partners WorldStage united both elements in a grandiose mapping which turned the iconic orbiter into King Tut’s bejewelled sarcophagus. A Dataton WATCHOUT system was teamed with six Panasonic projectors for the event. 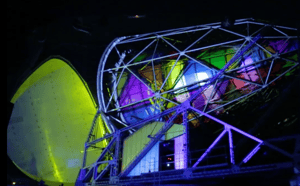 And on the subject of space… Parc du Radôme showcases the antenna used for the first-ever satellite TV transmission back in 1962 (between France and the US). An impressive structure in its own right, the Pleumeur-Bodou antenna has been enhanced with mapping using four projectors covering 54 meters, programmed in WATCHOUT.

Futsal is a modified form of soccer, played indoors with a five-strong team. For the finals of the National Futsal Cup in Portugal, Grandpa’s Lab mapped the indoor arena, turning the court into an urban landscape, a giant timepiece, and a futuristic game course – creating an eye-popping experience for futsal fans! 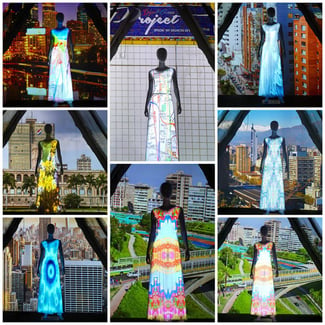 During New York Fashion Week in 2018, projector manufacturer Epson showcased an interactive video-mapping display. The display, part of the company's digital couture initiative, allowed users to select the look on the mannequins from an iPad.

On a medieval tower 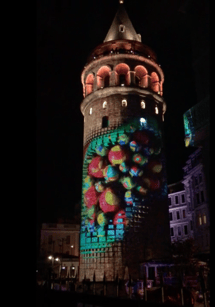 The landmark Galata Tower in Istanbul dates from the mid-1300s. With its light stone walls, and a great viewing location, the tower is a prime mapping object.

The most recent display, in April 2018, was part of the Istanbul Youth Festival and combined playful elements such as tumbling balls, video game themes and a bubbly soundtrack. The display used WATCHOUT multi-display software and eight Christie 20,000 ANSI lumens projectors. Technical solution by Visio-Vox with content created by Cream Studio.