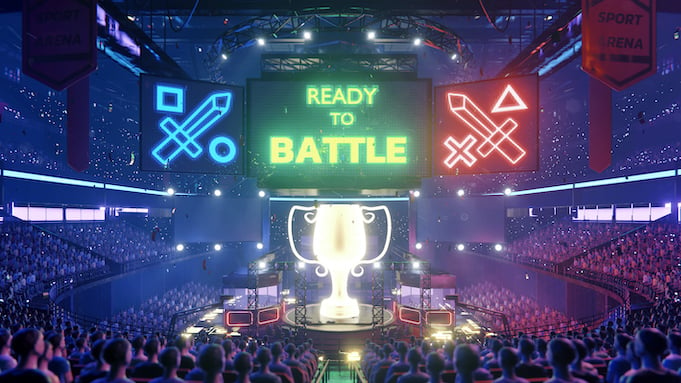 Esports were already booming before the pandemic and are now in an even stronger position. Adrian Pennington looks at the workflow that put the sport ahead of the rest from the start and the broader implications for the events industry in general.

AHEAD OF THE GAME FROM THE START

Most projections estimate that the competitive video gaming industry surpassed $1 billion in revenue in 2021. Market researcher Newzoo expects that to reach $1.8bn by the end of 2022 and some analysts go further and project revenue will exceed $2.5 billion this year.

Either way, the sector is booming, and that’s in the teeth of the pandemic.

It’s not as if esports were immune from the shuttering of live events. Stadium-sized events like Intel Extreme Masters, ESL One and League of Legends (LoL) Worlds had to be held behind closed doors. It’s just that, unlike regular sports, the live action continued unchecked.

Esports was in a unique position ahead of the pandemic because much of it is already played online. Audiences spiked during lockdown as more consumers were confined to their homes, driving them to spend more time on platforms like Twitch, YouTube, and Huya. Newzoo calculates the global games live-streaming audience (including mobile gaming) topped 728 million last year, a 10% increase over 2020.

For players, the shift to playing remotely was not a big adjustment as they were already used to playing online and from home. Most talent were also already outfitted for online streaming, as many had their own content channels and had previously invested in kit needed to broadcast online. It was up to esports producers to quickly pivot to this new reality.

Riot Games’ production team in the U.S was already ahead of the game. Since 2018, it has been deploying employing REMI or ‘at-home’ remote audio and video production workflows. With outside broadcast trucks eliminated from the company’s workflow, Riot’s L.A. facility served as the central station of its productions. Everything from audio mixing and on-site camera control to director shot calls and video playback are routed through the site.

In Europe, ESL Gaming expanded its Polish hub in Katowice in 2020 to four times the size, building new control rooms and playing arenas. The move was planned pre-Covid to accommodate soaring demand but the need for centralized Covid-safe production meant that ultimate flexibility was baked-in.

This includes a studio infrastructure capable of handling multiple external sources alongside signals from the studio floor, without any latency issues. The networking, which includes routers and extensive fiber lines as well as kit to convert desktop PC signals to SDI, is designed to be  configurable to any workflow, depending on the production’s requirements.

Meanwhile, Blizzard Entertainment turned to the cloud to keep its Overwatch League and Call of Duty League matches live since March 2020. In this case, the solution was built on Grass Valley technology and eliminated the need for a conventional control room. Virtualized apps such as multiviewers, router panels, test signal generators, switchers, graphics renderers, clip players and recorders are configurable as required and accessible from a web-based interface.

It meant that technical directors (TDs) could switch and monitor live feeds from home. Multiple distribution streams with separate graphics and languages for audiences in different regions can be produced by a single operator also working at home.

For years, esports has used equipment from vendors commonly associated with broadcast like Ross Video, Blackmagic Design, Calrec Audio, Panasonic and Grass Valley. Now, esports have taken the efficiency and quality of their output a step beyond conventional broadcast.

Given that signal integrity and split-second accuracy is vital to the interactive multiplayer nature of the game, esports technical teams have become adept at designing and operating systems with multiple feeds from game publishers, players, analysts, viewers and more.

Now producers, directors and TDs and in-game observers can all be working at multiple different locations, doing multiple shows by using a common cloud or a data centre-based infrastructure networked over fibre or protocols like NDI. Functions that have been locked into proprietary boxes for decades in broadcast facilities are already working in software in the esports field.

It’s working.  The 2021 World Championship of LoL held in November in Iceland without spectators had a record peak audience online of over 73 million.

This year fans will (fingers crossed) be back at the events in their tens of thousands but the remote workflows implemented these past couple years are here to stay. That’s because automation and REMI workflows not only reduce the number of production personnel needed for cost efficiency and environmental benefits but the result is a better final product.

For a start, a remote workflow managed out of a central hub enables more shows to be produced with fewer resources. Moreover, the ability to engage online viewers and live audiences in an interactive way is crucial to AV going forward.

Although mass-attend live events remain something of a novelty, it won’t be too long before audiences become just as demanding of innovation as they were pre-pandemic. That means that events producers of all kinds need to deploy an increasingly sophisticated suite of solutions to deliver an immersive experience that embraces both physical and virtual attendees.

Enabling hybrid in-person and streaming events necessitates the ability to collaborate and produce live content together while physically apart. In practice, this is done with multiple individuals spread out safely across many different rooms, spaces, and sites. Esports is doing this today.

AV and broadcast workflows and technologies were converging pre-pandemic but global lockdown has accelerated the fusion through software-defined and IP methodologies.

As the Metaverse of AR and VR content explodes over the next few years this set of skills being pioneered in esports that blurs the virtual and the real into one immersive experience is going to be in high demand.

LED: From display niche to leader in large screen visualization
The technologies that are changing entertainment and us
The changing landscape of live entertainment: Immersive experiences
Content management for media servers: What, why and how?