Choosing the right contrast ratio for your installation 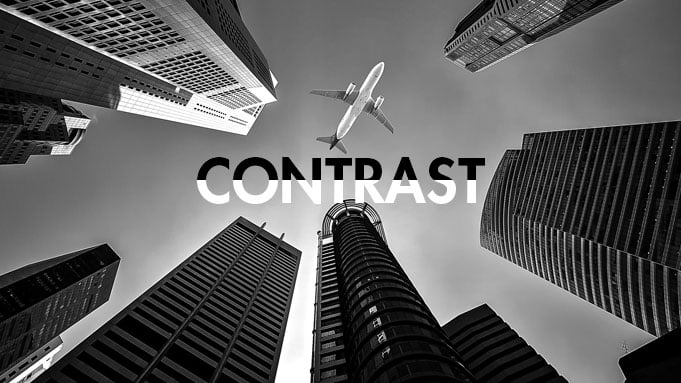 In display technology, contrast is one of the most important image quality metrics. It makes it possible to distinguish the content of an image, regardless of brightness. The challenges faced with contrast ratios are the same for all display technologies – not only projectors.

This article will cover the following topics

What is contrast anyway?

A contrast ratio of 500:1 states that the white is 500 times brighter than the black. In any display system, including projection, the higher the number – the better it is. As you will learn later, the display´s capability to produce a deep black level is the most critical component to achieve a high contrast ratio.

Why is contrast important?

Contrast ratio is all about seeing the subtle details in an image. Low contrast means no details. High contrast means lots of details. Which requirements need to be met in your system installation? Industry association Avixa (formerly InfoComm) created an ANSI standard called Projected Image System Contrast Ratio (PISCR), which defines four levels of contrast based on content viewing requirements.

When designing a system, it's important to know what to aim for and what to document. The standard helps provide a framework to support system designers or engineers in their work. It's also worth pointing out that we excluded several applications, or categories, because they have their own standard requirements, such as medical imaging (DICOM) and digital cinema (DCI).

With a passive viewing ratio, the viewer will be able to recognize the images on a screen and distinguish text readily from the background. However, it does not permit detailed understanding of content. Passive viewing will typically be used with noncritical or informal presentations.

The basic decision-making ratio enables the viewer to make simple decisions based on the content displayed on a screen. These decisions do not depend on critical details within the image. This ratio fosters active viewer engagement and is most commonly used in public information displays, presentations containing detailed images, classrooms, and some multi-purpose boardrooms.

With an analytical decision-making ratio, the viewer can make critical decisions based on the ability to analyze the content displayed on screen in detail. This ratio level lends itself to high-engagement, analytical environments, such as medical imaging, architecture, engineering, forensics or professional photography.

A full-motion video ratio allows the viewer to discern key elements of a video sequence, such as vital details provided by the cinematographer, or videographer, necessary to support the storyline. Full-motion video ratio is, therefore, most common in home theaters, business screening rooms and broadcast post-production settings.

The introduction of a fifth viewing category of contrast ratio

As part of the development team for Avixa standards, I have been involved in writing a further standard: the DVDISCR (Direct View Display Image System Contrast Ratio). The DVDISCR and PISCR standards have now merged into one and will be released later. Before I elaborate on why we are looking at adding a fifth viewing category, I recommend reading an excellent article by James Fife, "The race to black."

The race to black (levels)

In September 2017, James Fife published a brilliant piece on how important the black levels are when you want to achieve high contrast ratios. His article is related to optical projection screens and how much they add to contrast, but the same applies to direct view displays with very deep blacks, too.

During the development of the DVDISCR, we discussed adding a fifth viewing category – quite far above the 80:1 contrast which was the highest contrast ratio in PISRC. With new display technology, such as OLED, enabling deep blacks and hence very high contrast ratios, there is a clearly defined need for a higher standard of contrast.

What is this fifth viewing category all about?

Imagine that you are creating content and your screen has 80:1 contrast ratio as well as decent black levels. What happens to the content you have created if it is shown on a display with 250:1 contrast and deeper black levels? Worst case, your gorgeous content is displayed with noise and artefacts in the dark areas of the content.

The name of the fifth category is currently named Content Creation for Corporate Communications, and has a contrast ratio at 250:1. There's a solid reason for the higher ratio for content creation here: it gives the headroom needed when content is played back on new displays with high contrast levels and deeper blacks. That's also why we debated whether we should require a maximum black level on the display.

How are any of these contrast ratios relevant for you?

The ANSI standard combines important aspects –  such as display brightness and ambient light – in a complete system ratio. Depending on what you want to achieve from your installation, you need to consider which of the system contrast ratios is most applicable. By understanding the differences and recognizing your audience's needs, you're headed in the right direction.