AI and creativity: Is automation the new medium? 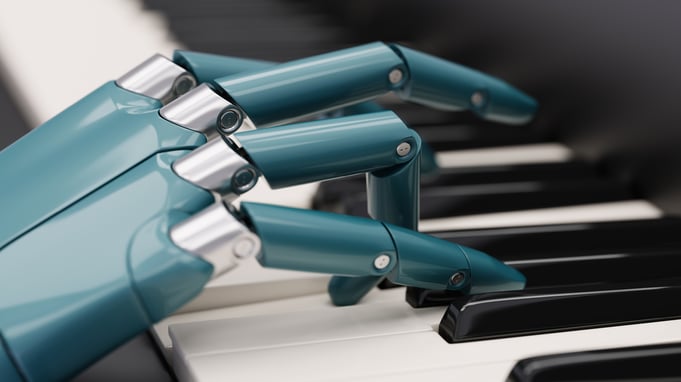 In the midst of a new wave of Automation Anxiety, creatives are beginning to realize the potential of automation to increase efficiencies, with some using technology to create new forms of expression that reflect the Digital Age and all its possibilities, writes Andrew Gordon, automtd andrew.

Can you automate creativity?

In recent years, we’ve seen that artificial intelligence is capable of creating art worthy of being shown at a mainstream gallery; we’ve seen their paintings get auctioned off by Christie’s for a whopping $432,500, and we’ve read their award-finalist novel about the day a robot decided to start writing (Who wouldn’t want to read that?). These new advances in creative automation create a unique type of “Automation Anxiety” that places the worth of human creativity at its center – If AI can create art, then what remains of our value as conscious, intelligent beings?

Currently, many creative professionals are of the opinion that creative automation can only stand to be helpful rather than harmful, especially with repetitive processes that artists and designers often find themselves having to complete. In a 2018 report commissioned by Adobe, they found that more than half of their respondents who were creative professionals were, in fact, very interested in what AI and machine learning could add to their creative processes, with only 12% claiming to be completely uninterested. “Creatives were on the fence when it came to AI just a few months ago,” said Chris Duffey, senior manager of AI strategic development at Adobe, in an interview with CMO.com. “Today they realize that AI is in much of the technology they’re already using, and it’s making things more intuitive than previously perceived.”

By automating mundane tasks such as shading backgrounds, labeling files, and general organization, Duffey believes that creative professionals would be “enabled to continue to evolve – to new and more complex creative disciplines like 3D and immersive design, and to make new breakthroughs in original, disruptive thinking.”

Even though AI and computer art are raising discussions of whether human creativity can be replaced, it’s important to keep in mind that the majority of creative automation tools today are most often used in non-creative capacities. While computers can memorize and process a lot more information than the human brain, they don’t really understand why they do the things they do, nor the concept of free will. As quick as they are, AI does not have the cognition, consciousness, nor empathy to make the same decisions that humans make on a regular basis.

Artificial Intelligence has a long way to go in its development, but it is unlikely that computer algorithms will be able to replace our capacities for creativity and expression anytime soon. Instead, the value of machines in the world of creativity will be to supplement the human brain wherever it can, not to replace it.

Andreas Pfeiffer, lead author of the Adobe report mentioned earlier, similarly believes that “creativity is not just about what you create, but why you create it,” while freelance art director Christoph Gey explains: “It’s not because you know the tools that you are a designer.” The word “automation” has implications of replacing work altogether, but what it really is, is a technology like any other: It’s meant to give us more time for ourselves by speeding up the parts of our jobs that seem mundane and repetitive. Artificial Intelligence, after all, is still designed by us in terms of its capabilities and commands, and it will help us do whatever it is we need help doing, but it will not be capable of true human creativity, which is borne of natural necessity (ie. Impulse and decision-making), experience and emotions.

While AI is indeed infiltrating many creative arenas, it has been the most apparent in the world of music. Remember the Spotify “fake artists” controversy? Spotify was criticized for feeding in songs composed by fake artists in order to pay lower royalty rates. Since then, these fake artists have reportedly accumulated upwards of 100 million plays in total, with about a million monthly listeners each. As a result, piano instrumentals and jazz music have been making a huge comeback inside these playlists, but the community suspects (and suggests) that there is no one at the other end to receive the praise. If you’re a musician, naturally you would be concerned that your hard-earned creativity is now vastly seen as replaceable by AI algorithms; you beg to differ, and you are correct.

David Cope, Professor Emeritus at UC Santa Cruz and cofounder of Recombinant Inc., a music technology company, has been weaving thousands of lines of LISP code into music-generating algorithms as early as 1981. His computer programs dabble with experiments in “Musical Intelligence” (You can find his computer-generated songs on Spotify); specifically, programs that can understand musical style and replicate it accordingly, while still adhering to musical rules (Keyword: replicate). Similarly, MuseNet is a deep neural network that generates “4-minute musical compositions with 10 different instruments, and can combine styles from country to Mozart to the Beatles.” Both examples have been extremely successful in doing what they propose, which is to replicate existing musical styles of “real” artists and composers, but it will take a bit more time before anyone can expect a computer to compose music based on their own thoughts and emotions.

While some have focused their algorithms into replicating musical styles, others have been using the advantages of machine learning as a part of their composition process. A most notable example is Google’s Project Magenta, launched in 2016 with an aim to push the boundaries of “machine learning as a tool in the creative process”. An open source research project, Magenta is a playground for musicians, artists and developers alike, allowing them to explore machine learning as the foremost musical instrument of today and tomorrow. Some featured projects created through Magenta include piano transcriptions using a neural network, making music with machine learning-generated sounds, and interactive jamming with machine learning models. Unlike the music-writing programs, Project Magenta focuses on the integration between technology and human creativity, with an emphasis on just how limitless the possibilities can be when we combine the two.

Outside of the musical realm, there are still many instances where automation has been extremely valuable when used as a tool or extension of human creativity. Back in 2012, the William and Flora Hewlett Foundation sponsored a prize welcoming programmers to design an automation software that could help grade essays in state tests. Intended to lower costs and increase turnaround times, this competition would also help ensure that school systems would not have to exclude essay questions from their tests in favor of multiple-choice questions, which are much less indicative of students’ critical reasoning and writing skills. While one would expect that grading essays requires the experience and creative thinking of the human mind, the results of this competition proved otherwise: The best of 159 submissions produced scores that were nearly identical to those graded by humans. The key to these scoring programs was that they were not assessing the merits of the essay; rather, they were mimicking how a trained educator would have scored the essay. By adopting the same grading standards as an experienced educator, the program acts as an extension or clone of that educator in completing the task, which directly decreases the time and associated costs. 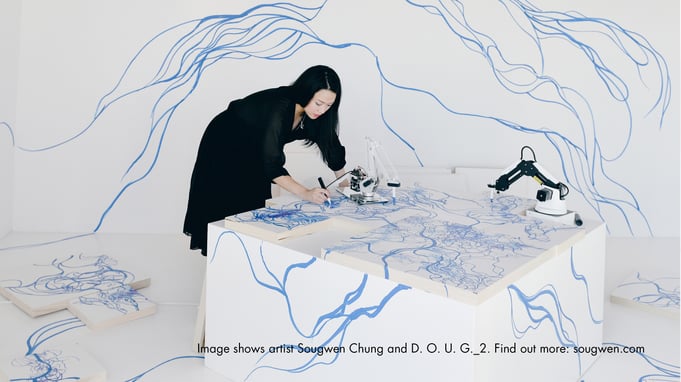 In a more collaborative application of creative machines, the robotic drawing arm by Sougwen Chung, known as DOUG 2 (Drawing Operations Unit: Generation 2), utilizes neural nets trained on Chung’s drawing gestures to learn the drawing style of the artist. In every exhibition, Chung emphasizes the collaborative aspect of this project by placing DOUG 2 next to herself as she draws on a canvas. At its core, the project “explores the artistic potential of human and robot collaboration”. Using computer vision algorithms, DOUG 2 learns from the artist’s hand and demonstrates a style inspired by the artist to develop a “composite behavior of human and machine”. The result is not only a stunning collection of complex lines and patterns, but also a live demonstration of a machine working alongside a human to create something original and otherwise unattainable.

By understanding what machines can replace in a creative process, we are discovering more and more that a lot of the creative work we do involves repetitive tasks that can be easily automated. The things that cannot be automated are also the things that we struggle to define for ourselves. Fleeting definitions of trends and taste, for instance, are decided on by the direction of humanity, which is unpredictable even to the most developed of machine algorithms or mathematical formulas.

Take Amazon’s fashion helper, the Echo Look – A “hands-free camera and style assistant with Alexa”, according to its Amazon page. With Echo Look, users can take photos and videos, then ask Alexa for styling advice based on current trends. However, as Kyle Chayka discovers, Alexa lacks the spontaneity and out-of-the-box thinking that helps dictate fashion trends. On the contrary, Alexa tries to match your outfit with the outfits that are already in the box. Trends, especially in fashion, are very arbitrarily decided by humans; in fact, most of the time, the most successful designers are the ones who subvert trends. In that sense, the Echo Look is nothing more than a second opinion – not to help you create your own style, but to make sure you don’t look bad.

While artificial intelligence has been extremely helpful in sorting and organizing data to produce coherent analytical results, they are still far from capable of being creative – that is, the power to create and dictate trends and taste. That isn’t to say that machines have no place in creativity – It is likely they will soon become instrumental to our creative processes, but maybe leave the creative direction roles for humans to fill, since creativity is, after all, something we define and relate amongst ourselves. It is a careful concept that many believe defines the human race, and it has become so correlated with the human mind that the two are nearly inseparable.

When we praise art, it is a testament to the human ability to create and innovate, not necessarily the result of said creativity. It will therefore take some time before we’re able to accept and identify signs of non-human creativity, and I suspect this fierce debate over whether robots and algorithms can really be “creative” will last for some time, but it doesn’t mean that computers can’t help us further our goals in self-expression in the meantime. With a defined objective, automation can help simplify, enable and even invent forms of expression that were once nonexistent. By integrating technology with art, we are defining the new era of human creativity, marked by advances in science and our ability to create anything out of our environments.

This blog was previously published on AUTOMTD ANDREW, read more about automation there or check out… 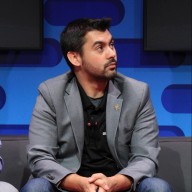 ANDREW GORDON is the Vice President of Business Development for CAST Group of Companies. An early tech adopter, in his Automtd Andrew blog he looks at how automation has affected us in the past, how it continues to shape our environments, and how it will go on to define the future of work and leisure. Check out @automtd_andrew on Instagram!