A short history of projection 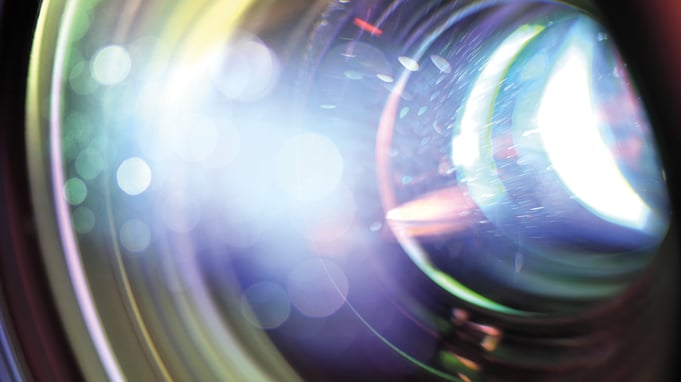 Did you know that the history of projection reaches all the way back to camera obscura and magic lanterns, but that it was the development of optics in the late 16th and early 17th century that made a major impact on projection as we know it today?

Where it all started

Roughly we can divide the history of projection into the following eras:

But let’s jump back a few centuries to where it all started… Camera Obscura.

Written information about the camera obscura principle (often referred to as "pinhole image") dates as far back as the fourth century BC in scripts attributed to the Chinese philosopher Mozi. The magic lantern can be seen as a development of the camera obscura.

While very rudimentary projection principles such as the camera obscura have been in use for thousands of years, we have to move to the early 1600s and beyond, when both the telescope and microscope were documented, before we see technological inventions that also have a major impact on today’s projection systems. Optical components used then, such as lenses and prisms, are still part of modern projection systems.

The Dutch scientist Christiaan Huygens is generally recognised as the true inventor of the magic lantern, a forerunner of the traditional (slide-based) image projector.. The oldest documentation of the magic lantern is dated 1659 by Christiaan Huygens, and consists of ten small sketches of a skeleton taking off its skull. On this document he wrote "for representations by means of convex glasses with the lamp" (translated from French). 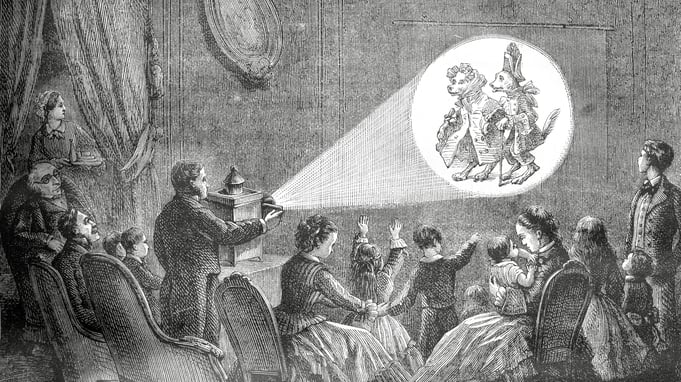 To create the projection, glass was painted, with black paint used to block light that was not intended for projection. Initially, to protect the paint a transparent lacquer was applied, while later versions used cover glass for protection. The light sources used at this time were candles and oil lamps, which of course significantly limited the light output of such a projection device.

Fast-forward a few hundred years and this projection technology was superseded by a much more compact version: the 35 mm slide projector, with a vastly improved illumination source.

The episcope was invented by the Swiss mathematician, astronomer and engineer Leonhard Euler around 1756. An episcope is a projection system that uses opaque materials to create the projected image, by shining a bright lamp onto the object from above. Mirrors, prisms and imaging lenses are used to focus the image created by the material onto a viewing screen.

In 1872, the concept was expanded by Henry Morton who used an opaque projector to create projection for larger audiences. To achieve this, he employed an oxyhydrogen lamp placed close to the projection device. This allowed him to create a clear projected image for audiences in the Philadelphia Opera House, seating capacity a whopping 3,500.

The first movie projector was the Zoopraxiscope, by the pioneering British photographer Eadweard Muybridge ;in 1879 (not a typo but the original Anglo-Saxon form of Edward!). To create motion, the Zoopraxiscope rapidly projected images from rotating glass disks.

But it was the Lumière brothers who invented the first really successful movie projector based on the work of the French inventor Léon Bouly: the cinematograph. This was a film camera, projector and printer in one. The brothers’ first film Sortie de l'usine Lumière de Lyon, was shot in 1894, and publicly screened in 1895. At the Paris Expo, films by the Lumière Brothers were projected onto a large screen measuring 16 by 21 meters.

These analog movie projectors continued to evolve all the way into late 2000, where they were gradually replaced by digital cinema projectors. Digital projectors offer a number of advantages over the traditional film projectors, and the digitalization of modern cinema was inevitable. With no moving parts except fans (and imaging devices), digital projectors are relatively compact, have no film rolls that will tear or show scratches (thus no need to change the reel mid-screening) and content distribution is far simpler. Initially the films were shipped physically, but digital all-electronic distribution has eliminated physical media shipments.

Since the 1950s, generations have been exposed to endless and tiresome slideshows, of mind-numbing vacation photos, or in history and art lessons at schools. During one such epos, I managed to fall asleep, tipped my chair and gashed my cheek – marked for life by sheer boredom! 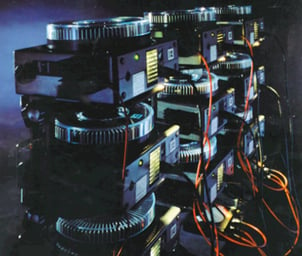 However, far from all the uses for slide projectors were uninspired; the creative use of slide projectors (lots of them, simultaneously) was one of the reasons Dataton entered the world of multi-display, introducing PAX, a four-projector control unit (follow the red cables in the picture to the black box!).

If you were part of the AV industry in the 70s, 80s and early 90s, you'll recall the sound of slide projectors stepping forward as multi-image shows, like the ones at Expo 67, 85 and 88, played.

The era of overheads

The overhead projector is built on the same principles as the 35 mm slide projector, but differs in that the transparencies (slides) used are much bigger, often up to A4 or US-letter size. Overhead projectors also found their way into schools and corporations in the late 1950s. This technology remained popular until the late 1990s, when other methods of projection started to make an impact. A LCD (Liquid Crystal Display) variation of this technology came to life in the early 1980s, allowing content be played from computers and video players (VCRs). At first, it was limited to monochrome, but by the end of the decade they could show colors, too.

Both video players and overhead projectors bring vivid memories of frustrated teachers to life. How hard it seemed to be, to make sure the video actually played and to make sure the overhead transparent was oriented properly.

From CRT to digital

A lot happened in the history of projection during the 1950s – like the arrival of those gigantic ships of projection that used cathode ray tube (CRT) to generate the image. To create color, they had three separate CRTs and their own lens. How fun it was, to align a CRT projector… With the introduction of digital video projectors (LCD, and DLP – Digital Light Processing), the CRT projectors died late 1990s and early 2000.

However, due to the fact that this kind of projector has very specific, high-quality performance attributes (deep black levels, no motion blur and long service life) as required in several niche applications, they have remained in use much longer. In fact, you can still find simulators using them today.

The era of digital projection began in the late 1990s and early 2000s, when technologies, such as Digital Light Processing (DLP), liquid crystal on silicon (LCOS) and LCD (liquid-crystal display) became available at acceptable prices. These projectors were smaller, affordable and digital; all characteristics that are highly appreciated by anyone interested in projection. Today you can find everything from tiny pico projectors the size of a matchbook with a handful of lumens, up to the largest, high-resolution beast boasting up to 60 000 lumens.

At the time of writing this, Barco seems to be in the lead when it comes to the world’s brightest mass-manufactured projector, with 75,000 ANSI lumens in their XDL-4K75 projector. Digital Projection tops resolution with their 8K digital projector: the INSIGHT Laser 8K, alongside JVC with their home cinema market DLA-RWS3000 and DLA-NX9 – both with 8K resolution. That said, most projector manufacturers have announced or demonstrated 8K resolution projectors. The future certainly looks bright!

(Parts of this were published in an earlier blog!)