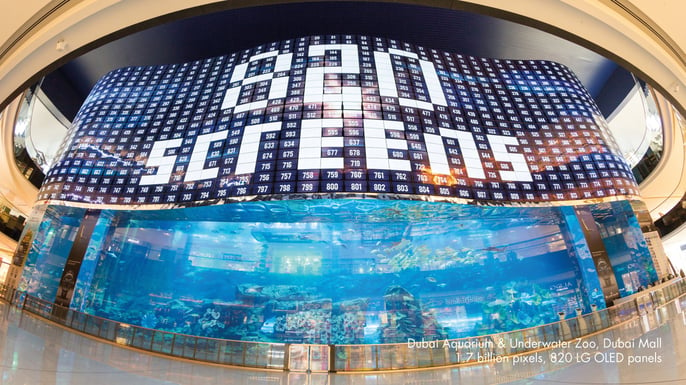 We have embraced 4K, and while some are still struggling to get on top of the challenges that 4K brought, several manufacturers are gearing up for 8K resolutions – and beyond! What are the benefits and challenges of higher resolutions? What products are there in the market?

In this blog, I’ve taken a look at the race for higher resolutions, and sounded out two projector manufacturers, Barco and Digital Projection, as they ramp up for 8K.

What is display resolution?

According to Wikipedia, the display resolution is the number of distinct pixels in each dimension that can be displayed by a display device, such as TV, monitor or projector. The resolution is usually quoted width × height, with the units in pixels. As an example, a full HD display is "1920 × 1080" which means the width is 1920 pixels and the height 1080 pixels.

Let’s be honest – understanding the basic resolution definition itself is not that hard. What can be more mentally taxing is to comprehend the underlying complexity and challenges we put on our workflow infrastructure in order to scale to higher resolutions. But before we start talking about what’s behind 8K resolution, let’s look at the most common resolutions and terms: 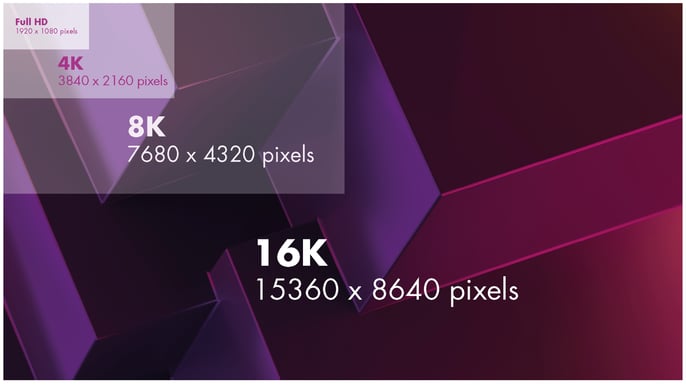 Digital Projection introduced the world’s first 8K digital projector at Integrated Systems Europe 2018 (ISE). Mark Wadsworth, International Marketing Manager at the company, has already noted the challenges with new terminology and the need for education: “We came across this quite a lot at ISE, where people assumed that 8K was simply 2 x 4K projectors. As with anything new, education is massively important to explain not only the technicalities of 8K, but the potential benefits too.”

The first commercially available 4K camera for cinematographic purposes (the Dalsa Origin) was released in 2003. In 2005, Digital Cinema Initiatives (DCI), a standards organization in the cinema industry, published the Digital Cinema System Specification, which standardized 2K and 4K container formats for digital cinema production, with resolutions of 2048 × 1080 and 4096 × 2160 respectively. YouTube began supporting 4K for video uploads in 2010 as a wide range of manufacturers had started producing affordable 4K cameras.

But it was not really before the price of 4K TVs started dropping in 2015 that 4K became a broadly embraced standard. One research company has forecast that 50% of the US market will have a 4K TV by 2020. Just a couple of years to go…

Even if you have displays supporting 4K resolutions, and have had so for many years, it is still a challenge to distribute content in 4K. Companies like Netflix and Amazon have 4K titles, but these are not widely adopted and few other broadcasters around the world distribute 4K.

The reason comes down to the lack of bandwidth through the entire value chain. First, you need to support higher resolutions in the acquisition process. This is mostly covered. But the biggest challenge for broadcasters, as well as the corporate AV world, is the signal distribution from central to end-point. It is only recently that 4K components for the entire workflow and infrastructure have become available at a reasonable price point.

The p in1080p stands for progressive and indicates that all the pixels in the resolution are drawn 100% every frame, compared to the 1080i where only half of the pixels are drawn every frame – a way to reduce bandwidth.

Illustration/table from Karl Rosenberg of Extron, presented at a BICSI winter conference in 2016.

So is 4K a true commodity? The answer is a definite “maybe.” Individual 4K products are a commodity now, but that does not automatically mean that the entire infrastructure is deployed or ready.

Mark Wadsworth, Digital Projection, says: “I don’t think 4K is fully at the commodity stage yet. The back-end infrastructure has only just about caught up to this, especially when it comes to high frame rates and uncompressed content at 4:4:4. While it may be seen as a commodity in the home/TV market, it isn’t yet in the professional AV market.”

4K, 8K and higher resolution display products in the market

While 4K products have been available for a number of years, the market is not saturated with 8K products. And it likely to be a few more years before we really see 8K products in any kind of volume – with the exception of displays which tend to be introduced early.

When it comes to projectors, Digital Projection showcased the world’s first 8K unit in early 2018. At the InfoComm trade show a few months later, Barco previewed its 8K projector.

I asked André Jensen, Product Marketing Manager, Barco, why it is important for the company to showcase a product like the 8K projector. His reply:

“Barco has a tradition of early introduction of new resolutions and projection technologies to the market. We were the first to bring a WQXGA resolution for niche markets such as simulation and V&AR, we have just introduced the XDL, a 75K lumens direct laser for the large events and attractions market. Even though there is no real pull for 8K in the market today, it is important to bring the message that Barco is ready to meet a future demand.”

It’s fair to say that it is just a matter of time before Panasonic, Epson and the other manufacturers also announce 8K projectors.

Other 8K display devices include the OLED screens showcased by LG at the CES trade show in January 2018 , the Dell 8K monitor, SONY’s 8K 10.000 nit 85-inch TV and let’s not forget Sharp who introduced an 8K TV back in 2015, with a neat price-tag of USD 133.000… It costs to be a first mover! I wonder what content the owner of the screen has been looking at since 2015… poorly upscaled BluRays perhaps?!

Interestingly, the Japanese public broadcaster NHK has announced that they will launch an 8K satellite channel in December 2018. NHK started 8K test broadcasts back in 2016, and will begin satellite broadcasting of their 8K format, named Super Hi-Vision, in December 2018. NHK covered the 2018 Winter Olympic Games in South Korea in 8K. To support their high-resolution broadcast efforts, they have even developed a full resolution 8K recording chip camera that shoots at 60fps at 15360 x 8640p at 12bitHDR. Their goal is to increase the frame rate to 120fps by the 2020 Summer Olympics in Tokyo.

What ARE THE BENEFITS OF 8K (and HIGHER) DISPLAYS?


Higher resolution means more and smaller pixels on the display (unless the display size scales accordingly) resulting in more detail in the image. It is well documented that higher resolutions yield more efficiency. [Read more about the power of pixels here]

In addition to the direct benefit of more pixels, higher resolution also means you don’t need as many displays to show the same number of pixels. There are several installations where this is important, such as scientific visualisation, simulators, virtual reality, planetariums and domes.

Mark Wadsworth, Digital Projection, explains: “Additional pixels are a massive benefit, especially in installations where multiple projectors have previously been used in limited space. Dark rides, planetariums and other immersive installations will benefit massively from the pixel density of 8K. We are seeing a lot of interest from companies that deal with architectural drawings, where 8K allows viewers to get very close and explore fine lines and details that was previously only achievable on paper.”

André Jensen, Barco, notes the demands from simulation environments: “High resolution displays have always been in demand with many of our clients. In training and simulation there is a constant race towards visual acuity. More pixels give higher resolution and a more true-to-life training environment. In the events market a large canvas can be populated with multiple sources to create unique experiences. Using high-resolution projectors in a multi-channel application means less real estate, as you can cover the desired screen area with fewer projectors.”

What are the challenges of higher resolution displays?

Just as is the case with 8K, when 4K was announced there were not many displays, and it was a challenge to find sources who could play back 4K material. As the players became available, there was a clear need to distribute the content from a source to the end display – the infrastructure.

With higher bandwidth requirements as illustrated earlier, the infrastructure (scalers, switchers, routers, converters, cables and basically any kind of device between the display and source) became the limiting factor to distribute the high-resolution content. It was not ready to support these bandwidths.

Simultaneously, we have a paradigm shift in the AV industry where we are getting geared more and more towards IP-based infrastructure. This means that a whole new set of tools and equipment needs to be developed to support both high resolutions and networked AV.

If you are planning on doing IP-based infrastructure upgrades sometime soon, don’t forget to plan for the high-resolution content that your AV equipment will need.

André Jensen, Barco, comments: “While the end displays are capable of processing high-quality content at high frame-rates and high color depths, the entire image pipeline and infrastructure is not yet ready for 8K. It will require major investments in infrastructure and content creation before the market is mature enough for 8K.”

WHAT IS THE FUTURE OF HIGH-RESOLUTION DISPLAYS?

I predict that the future will bring more pixels! But we might see a shift in who or what drives the market. At a certain point, there is just no more (or very limited) extra value of going from 8K to 16K on screens. The limitations can be found in the human eye – when the pixels get so small we cannot separate them any more.

SONY wrote this in their FAQ about a 4K TV:

If you want to learn more about visual acuity and the Snellen chart, you can find a lot of information about it on Wikipedia!

My take is as follows: TV sets and flat screens intended for personal viewing (not public space video walls) will reach a natural limitation at 8K or slightly above, due to the nature of human vision. Displays intended for other uses, such as public displays, scientific visualization, virtual reality and amazing things like real 3D holograms, will take advantage of far higher resolutions than 8K and 16K – perhaps 64K, 132K or even higher.