In this Q&A, we're talking projection in domes with Malin Hallbeck at domeprojection.com. The Magdeburg-based company is chiefly known for their ProjectionTools product which is widely used in training, simulation and entertainment installations worldwide.

Q: Is every dome the same?

A: No! Domes come in different sizes and angles of installation, mostly depending on how the screen area is being used. Planetariums tend to use larger, fixed, perforated domes which are installed with a tilt angle to give the audience a good viewing area. In flight simulators, the dome mostly encloses the pilot seated in the mock-up. These domes can sometimes also be facetted, made up of multiple flat segments.

There’s a big demand for larger domes for events and the ones used there are usually geodesic domes.

Another popular application is for dome-based driving simulators, which are installed on motion systems with exchangeable cars. These domes have their own set of requirements: they need to be rigid to endure the forces created by the movement, but also light to minimize the weight.

Q: Where did it all begin?

A: The ProjectionTools product started out as a method used by project: syntropy engineers when setting up multichannel installations. project: syntropy delivers solutions for simulators, planetariums and highly immersive environments. As features were added and the capabilities grew, other integrators and end-users began to show interest. They realized that these tools could improve efficiency as well as delivering repeatable geometry correction and warping results. In 2014, the inventors of the method decided to start to develop a professional solution that could also be used by others. The company domeprojection.com® was founded and ProjectionTools was developed and made available for others.

Q: What are the challenges of projecting in a dome?

A: There are a number of pitfalls to avoid when covering the inside of a dome with seamless imagery from multiple projectors. For example, you need to ensure that the projectors are calibrated correctly so colour levels are the same across the entire image. Dark domes are especially sensitive to differences in colours as there are no other light sources to offset or mitigate variations. Conversely, light areas in domes will reflect on to other parts of the dome which lowers the contrast. As domes are curved in two dimensions, they can be an epic warp-and-blend challenge. You want to be certain that the projections fit the geometry of the surface exactly, every time, but preferably without time-consuming manual alignment.

Our auto-alignment system ensures recalibration with very high precision and accuracy. The system supports a wide range of high-quality measurement devices throughout the whole setup and auto-alignment processes, including usage of multiple, calibrated cameras.

To be compatible for use in many different areas, we integrate ProjectionTools to work with different media servers (such as Dataton’s WATCHPAX range), realtime simulation software, hardware warp/blend units, graphics cards and projectors with built-in warp/blend capabilities. The number of integrations is constantly growing.

Q: Have application areas changed over the years?

A:The application areas might not have changed, but, as the technology matures, the number of users grows in different segments. Popularity also varies over time, with a higher number of projects in certain areas for a while.

We are active in entertainment and simulation markets which are the chief sectors for this kind of projection. The entertainment market includes planetariums, science centres, museums, themed areas and events. The image above is from the 30m dome projection at Expo Yeosu. 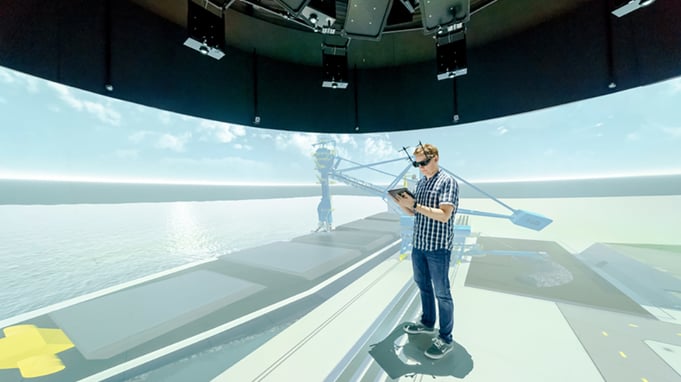 Q: Is it all done by projection?

A: The installations we make are based on multiple projectors which give better final visual quality. There are also installations including mirrors. Projectors often need to be installed with a certain orientation and, under these conditions, mirrors can be helpful to realize floor projections, for instance. Projectors equipped with fisheye lenses are used less often now.

A: Yes! The wide availability of Power over Ethernet (PoE) industrial-grade cameras has improved the quality of larger installations significantly. Integration has become much easier – think of cabling, for instance.

Content for the new projector generations which supports higher resolutions (4K and upwards) is often played out with more than one video input and sometimes often generated by more than one image generator. We’ve developed various high-quality alignment features for this kind of split setup to ensure the audience gets the full benefit.

Delivering calibration for dark environments – such as night vision training or planetariums – demands advanced black level correction features, or optical blend masks. For night vision training, we’ve developed a patented system which provides high-quality blend masks based on the measurement of the real setup, instead of predesigned masks based on theoretical projection design data.

Over the past years, additional tools have been developed to align projections on complex, arbitrary surfaces. Beyond the standard functionality of finding projector position, orientation and frustum, which is essential for 3D mapping projects, warping as well as blending can be calculated automatically.