Stereoscopy – what, how, when and what happened to 3D TV?

You’ll find stereoscopic displays widely implemented in a multitude of applications ranging from operating remote devices, television and video games, scientific visualisation, computer-aided design, to medical surgery, and, of course, entertainment. The technology and 3D effects have contributed enormously in enhancing the user experience. But what do you really know about stereoscopy?

The term stereoscopy comes from Greek: stereos (means firm or solid) and skopeo (means to look or to see). Sir Charles Wheatstone was one of the pioneers of the field and the inventor of the stereoscope – the first "3D" solution – back in 1838. 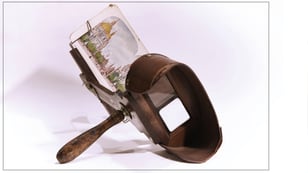 The stereoscope was used to view a pair of images of the same subject taken from points approximately the same distance apart as human eyes. With the invention of the  stereoscope (pictured), he showed that two images can be combined by the brain and perceived as having depth.

The history of stereoscopic technology is interwound with the early days of photography. Louis Jules Duboscq’s took a picture of Queen Victoria with a stereoscopic camera in 1851, for example. Over the years, advances have come (and gone) in this technology. Some of the most noteworthy when it comes to cinema and TV are:

ON A ZERO PARALLAX PLANE

“… a technique used for creating or enhancing the illusion that an image has depth by showing two slightly offset images separately to each eye of the viewer.”

Basically, whenever you look straight, the eyes are in parallel to each other. But when you focus on a particular thing, placed right in front of you, then the vision of both eyes meets at a certain point, which is known as zero parallax plane. 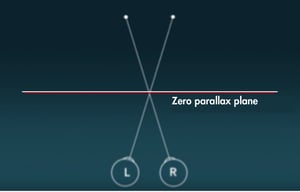 Check it out: Place a finger in front of you, and then focus on the finger. You’ll see that the vision of both eyes intersects at a certain point.

While viewing stereoscopic content on a screen, the computer monitor or the screen of the local cinema, the zero parallax plane can be thought of as the surface of the screen.

If you are planning to create stereoscopic content (a future blog!), there's actually a whole range of tools that help the human brain to decide depth and relative distance in an image or video:

3D in the cinema

Digital stereoscopic projection technologies have come a long way since those first attempts mentioned above. At cinemas, you’ll probably encounter one of these three 3D technologies:

RealD 3D: One of the most common and popular forms of 3D technology, widely implemented in theaters. In this technology, glasses are used which polarise the light so that both eyes could see a slightly different image. The end result for the user is an interactive and immersive experience.  RealD 3D is a registered trademark of RealD (US).

Dolby 3D: Dolby is a registered trademark of Dolby Laboratories, Inc. In this technology, the three primary colors; red, green and blue, are divided into two different wavelengths. One of the left eye and another one for the right eye. It is generally considered one of the best technologies for watching 3D movies. The glasses that are required for Dolby 3D are quite expensive, with a different coating on each side of a glass in order to filter out particular light frequencies. This technology was developed by the German company INFITEC.

Active stereoscopy requires glasses with built-in electronic components. On each side of the glass, there is a liquid crystal layer, which seems transparent in normal conditions but becomes dark when voltage is applied. Coordination between both sides of the glasses is controlled with the help of a timing signal. This signal helps in synchronising the images fed to the left and right eye to give the 3D effect. The glasses are rather bulky as batteries or connection are required to power them.

Passive stereoscopy (also called passive 3D) glasses are usually used for viewing 3D movies at cinemas. In this type of stereoscopic technology, the left and right images are superimposed on a screen with the help of polarising filters. In order to preserve the polarisation, a silver screen is used for projection of images.

This kind of projection method works well for large groups and the glasses needed are very cheap and lightweight, compared to the active ones. The only disadvantage of having a passive display is that each of your eyes will see only part of the image. This ultimately leads to less precision in the display.

The INFITEC (or Dolby 3D) is also a passive 3D technology, but it uses as described above optical filters with separate wavelengths compared to the polarised passive 3D.

And What happened to 3D TV?

3D TV was a big thing in the late '00s. But it did not last very long. As of today, most 3D TV sets and services are no longer available, with LG and Sony being among the last manufacturers to cease support of 3D features.

There are several reasons 3D TV didn’t really take off:

Will 3DTV  make a comeback when the technology matures, and consumers are more prepared to embrace it? Time will tell…