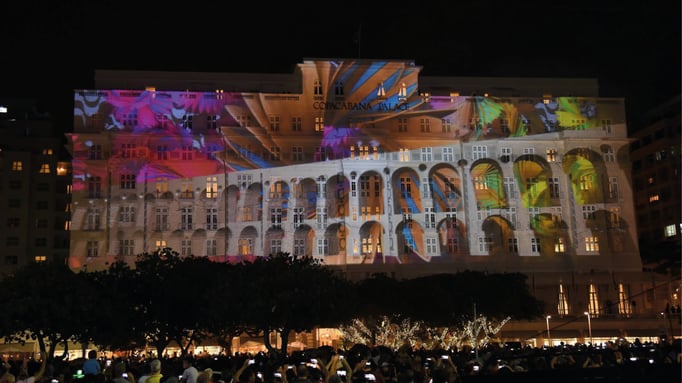 This week we hand the blog over to internationally-acclaimed VJ Spetto, founder of United VJs, who reflects on life before and after a pandemic, with a candid look at the downsides and (unexpected) upsides of life in lockdown.

Before the chaos of the global pandemic, I considered myself to be an audiovisual artist with a long and successful career: for over 25 years I have participated in major art festivals, creating and performing content for VJ sets, video mappings, car reveals, movies for full-domes, Olympic ceremonies. I used to work with dozens, or even hundreds of projectors at the same time, design integrating systems, connections, media servers, large teams. That was before the pandemic.

Many decades ago, in the last century, I lived in Santos, a very pleasant coastal city. There I went to university to study architecture. Then I left the beach and went to the big city, I moved to São Paulo.

In the metropolis, I worked as a graphic designer and art director.  In my spare time I acted as a musician and videomaker. Gradually the music and the video spoke louder. Before I knew it,  I began to unite the two in my performances. With the explosion of raves and electronic music, I became VJ Spetto, one of the pioneers of this art in my country and since then projection has been my name. 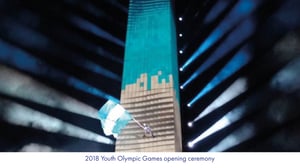 I have been involved in memorable works in my career: I projected on the facades of the Royal Festival Hall, on the banks of the Thames. With my team, I directed the production of content for the Opening Ceremony of the Rio de Janeiro Olympics, later I was Director of Images and Content for the Opening of the Youth Games in Buenos Aires. And did the same in Bolivia. I went from the salt flats in Bolivia to the icy landscapes of Turku. I went from the Amazon to the Turkmenistan desert. I projected at CCTV Tower in China, during the celebration of the 70th anniversary of the Communist Revolution. I was honored to project twice on the facades of the iconic Copacabana Palace, paying homage to all my heroes of Brazilian popular music. Most recently I was in the former capital of China, Datong, the city that hosted Marco Polo during his travels. I was there projecting my content and promoting China's first video mapping festival, the ACSEE Festival. 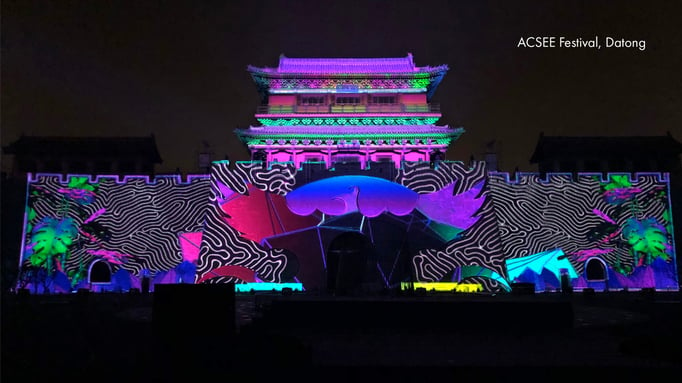 All of this was before the pandemic.

Nowadays, I usually cook twice a day, I have organized my shoes and clothes and now my house feels like a home instead of a warehouse for equipment, cables, cases, LED bars as it used to be in the last years.

I created a methodology to not die of boredom. Food with themed menus during the week, drinks on weekends, cleaning the house every seven days.

I changed the layout of my studio about four times in the last three months. Which made me start to suspect that I have a mild case of Obsessive Compulsive Disorder.

Right at the beginning of the lockdown I thought it was a vacation. After all, for the last 10 years (maybe 20??) I have worked non-stop, going from project to project, living more at the airport / hotel / venue than at home. I even think it was this lifestyle that contributed to end two marriages (I'm sorry D & F!).

And since it was a vacation – because all the gigs and projects were cancelled or postponed – I turned it into a party. But, look, it's a lockdown! So let's go to virtual parties! In the beginning, I did a series of streams (almost thirty), doing two, three, four sessions a day, where I connected VJs around the world for an audiovisual jam session in real time. At the end of two weeks, I was destroyed. It was a two-week hangover! Because a party without a drink is not a party. It was a mess, but I liked it!

So I thought of doing something more useful. The pandemic has revealed the lack of leadership in Brazil. Because of this scenario some friends, Brazilian VJs, started to unite in groups on WhatsApp in order to create artistic actions. We began to project messages of hope, useful information about the epidemic, words of support, and other humanistic agendas from our windows into the façades of the buildings, each VJ in his or her own city.

This action grew and then @projetemos appeared. Since then the group has accepted more and more members from all over the country – and remember that Brazil is a giant territory! The network that @projetemos created we call Projetosfera, a group of projectionists that feed on a shared online base of videos of the collective members. Today we have more than 40 projection points around the country, which daily project their messages in sync. A theme is chosen and projected. Comrades, let's project (Camaradas, projetemos) !! 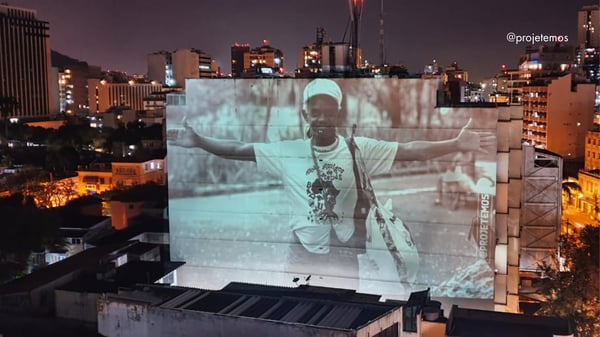 The projections ended up gaining prominence and several communication channels highlighted us, people gave feedback, photos on social media. This leading role for projection is thrilling! It dominates the walls of cities, invading meanings, semiotics, which create bonds between people. I think that is the role of art.

It is interesting to see how the human being adapts. Even more interesting is how art can foster empathy between people. Elements so important and so alive, even if we are living at a distance.

Understanding Brazil is not for beginners. Here we had an initial lockdown launched by local governments. However, the federal government boycotted local governors. And then there was confusion in the population, where half stayed at home and half ignored the measures. I belong to the team that stayed at home, waiting for the return of the entertainment industry. But many people are still on the streets. Still, no one is stupid to be huddled at a show or an expo or a mall or something like this.

This quarantine led me to think about my role as an artist. How would I – who always worked with crowds, with human warmth, with the city – behave in an environment where the minimum distance is two or three meters between people?

I think the main lesson was to know and value connections even more: I have over a thousand names on my personal contact list and it was amazing to see each of the names and remember the faces and how I had met them. It is an immense exercise in memory ... So: exercising memory, was the first lesson of the quarantine.

Every day, I spend a few minutes calling or texting someone in my contacts. It's how I say: look, I'm really here, and I really thought about you, because I like you. I love to relate to different and diverse people and that is priceless in humanity. I think that it is very important to express it, to keep our humanity working at high levels.

I also started to keep a diary on Facebook, as a way of reminding me how long I've been in lockdown. And also to expose the adventures of my days. After all, for someone who practically lived in the air and in hotels, rediscovering their own home is quite an adventure.

In São Paulo, the decrease in cars on the streets immediately resulted in cleaner air, less noise pollution and several wonderful sunsets.

The pandemic is a clear demonstration of how the planet works. And I think that we should take these conclusions to the post-pandemic era. Our industry is not at all ecological; to produce an event there are cables, equipment, generators consuming fossil fuel, transports, and all the garbage that's created by a lot of people together. Sometimes we do all these crazy efforts for a five-minute event!

We really need to talk about this. Because if we do not, it will be someone of the next generation who will take the necessary measures.

I think we need to be prepared for the transition. Nothing will end overnight, but it will change. People have liked entertainment since the cave days. Art will not end, showbiz will not die. But it will move on to something more reasonable, that makes sense globally. Some arenas will remain, others will transform. People are already thinking about it, whoever is more innovative will win, for sure. 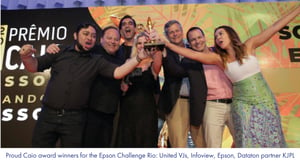 At some point people will come together and celebrate. When that happens, I will be there, with my art, pumping up the party!

I like big events and being part of the construction of a big celebration. After all, what other reason is there to be on this planet than to be happy and celebrate life? This is what I fight for, this is what I will continue to fight for.

Somehow, this demand for change cheers me up a lot. It makes me feel 20 years old, starting all over again. But the cool thing, and this I noticed with @projetemos, is that we like to live in communities where we identify ourselves. We are very social.

I think I’ll leave quarantine with a lot more friends than before. And with much more impetus to get things done. I can't wait to meet you all again. 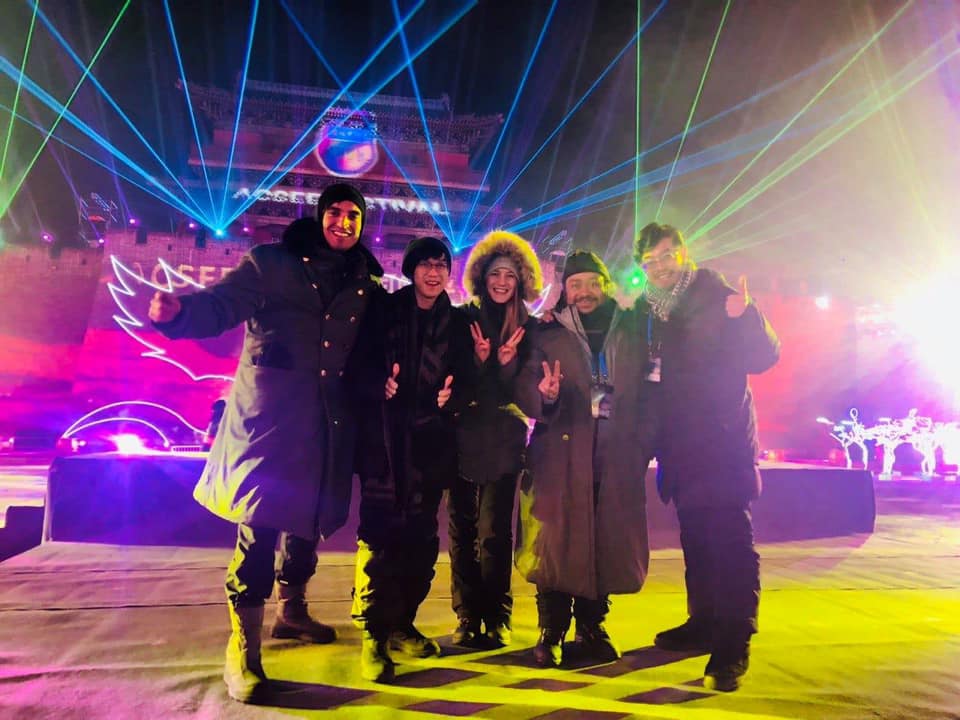 Going virtual: museums in the age of corona

What every media server operator should know

VJ SPETTO is a pioneer of the VJ genre in Brazil and a specialist in projection mapping, video performance and interactive installations. Over the past 18 years he has performed in all major cities in Brazil and all over the world. He became one of the most acclaimed artists in Brazil and as a curator he has created and organized the festivals: VJ Torna Brasil, VJ University, Performa Paço, Johnny Walker Red Mix and Dialectos Digitales (Bolivia).