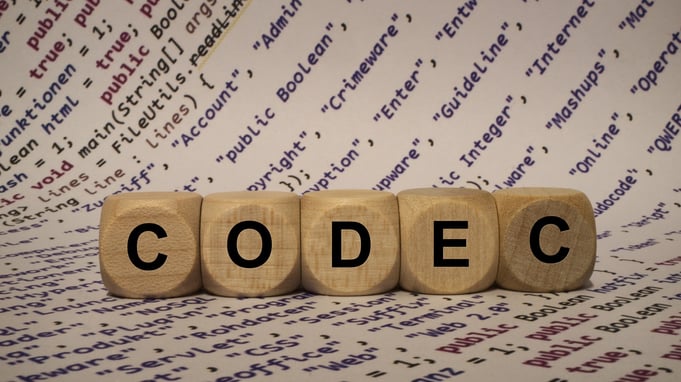 Following on from an earlier blog, this post puts the spotlight on coder-decoders (that's codecs to you and me!) with a special look at the MPEG family. Read on…

WHAT IS A CODEC?

The term codec is a combination of two different terms: code and decode. It can be defined as a standard used for first compressing and then decompressing media files, especially audio and video.

A codec is either a computer program, or a hardware device, which has the potential to store files on digital devices (or disks) and deliver large media content over the internet or network. It does so by reducing the overall required bandwidth. Codecs employ a mathematical algorithm which transforms and encapsulates the data for transmission. The main objective of designing and implementing codecs is to make media files playable on devices other than the one on which it was created.

Codecs are generally used for two purposes. The first one comprises analog-to-digital transformation and vice versa. The other purpose includes the process of encoding the audio and video recorded using a microphone or video camera into a digital form, in order to transmit it to others through video conferencing, broadcasting or streaming. Codecs are key to the success of multimedia applications, including teleconferencing and webcasting over the internet.

Nowadays, there are numerous codecs available which have their own strengths and provide support for specific functions. For instance, if you want to add a video in your website, you will require a different codec fram the codec you'd use to play the file directly in your video player application.

Some commonly used audio codecs include the following:

And some of the most common video codecs include:

So how do you know which codec is best for your purposes? The answer is… it depends. Different applications have different requirements regarding the size of the compressed file, the speed of compression and decompression, and, not least, the quality of the final image. An event with live video calls for faster compression/decompression (in order to get the images on screen ASAP) compared to a pre-recorded video that is featured on a website. It's a matter of horses for courses.

Lossy or not: Different TYPES of codecs

There are various codec types available in the market, with different approaches to encoding and decoding. For example…

The most common, popular and extensively used family of codecs is based on MPEG standards. The term MPEG stands for Moving Picture Experts Group, an organization formed to establish a standard for encoding digital media such as audio and video content. It works under the supervision of the International Organisation for Standardisation (ISO).

The MPEG standard is widely used because it provides better quality video output at desirably low data rates. It uses an advanced compression algorithm which compares favorably to other standards, such as AVI, and also provides support for streaming.

Some of the major MPEG standards include the following:

Wondering if the file in front of you is MPEG or not? Some of the extensions used by the MPEG files are listed below:

Head on over to the Moving Picture Experts Group website to find out more!

Previous:
Is this a codec (or a container) which I see before me?